From Jiangsu and Zhejiang area, has been south to the old Huizhou, until the northern Fujian, bamboo shoots are a kind of nostalgia. Remember the story of Huizhou in Shexian people to listen to the story, the Southern Song Dynasty in Hangzhou, Hui Merchants homesickness so rich, so every spring shoots broken ground, the family members have to start early to ask the mountain bamboo shoots dug, shipped along the Xin’anjiang down , When the boat sprouts to the sheath of the layers of peeling, cut into the casserole, with a small fire slowly stew, day and night and to Hangzhou, open casserole, bamboo incense overflowing, as if in the home to eat fresh bamboo shoots as delicious. Born in the north, although it is difficult to the kind of love of the local people feel the same feelings, but from the luxury of the night boat story, still able to give birth to the imagination of spring bamboo shoots. 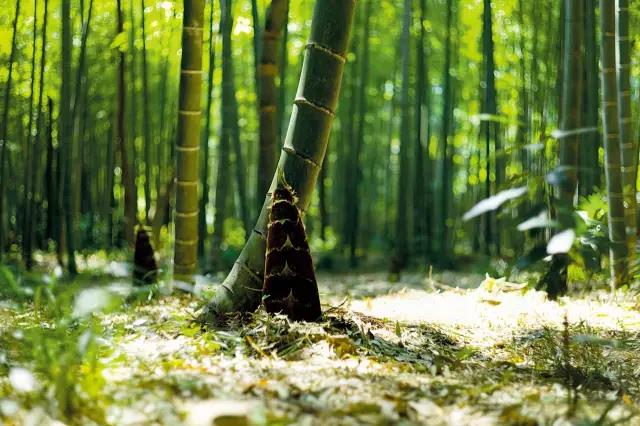 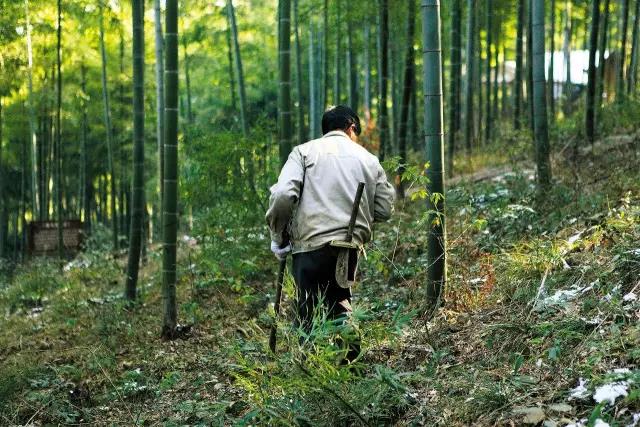 Although many people feel that winter bamboo shoots taste better, but the spring bamboo shoots to learn the earth spring back to the fine gas, the same life is equally obsessed with life. It is said that the rain before the night, bamboo forest can even hear the bamboo shoots joint “wind” sound, the next day a look, all over the spring shoots are taking their heads. Spring shoots is also a fleeting wonderful. Burst out of the ground, the tip of the culm sheath from dark to green into the green, began to fibrosis, so the timing of bamboo shoots is very important. Fresh spring bamboo shoots peeled off the skin, and some show a crispy butter fruit green, Zhuo water to remove astringent taste, cut hobs pour a little cream sauce, empty mouth to eat crisp overflow of water, taste great.

Spring bamboo shoots is the most classic practice and bacon with a. Anhui cuisine in the bacon stew spring bamboo shoots, Jiangsu and Zhejiang cuisine called pickled Te fresh, are similar ideas, so that fresh bamboo shoots and precipitation of a winter meat with the United States together, mutual leveraging. I eat in the mountains of the old Huizhou where the most authentic bacon spring bamboo shoots, they are from the courtyard of the storage room, the back of the hall door and stove fire were moved out of a few bacon, pick out one of the fat and thin, wash And then cut into thin slices, and then cut into the same size of thunderbolt, together into the casserole, add stewed ribs of the broth, on the small soil furnace gurgle to small fire slow stew. Bacon spring bamboo shoots time-consuming, but very worry, if a family up the mountain work, put the casserole buried in the ashes, weak and slowly stewed, and then back home when the cover will be fragrant overflowing. 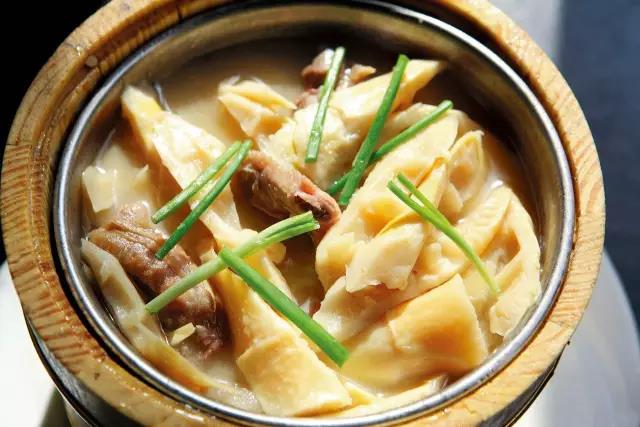 After the winter solstice bacon, after two months of salty, dry, the practice of the mountain is the absurd nature of the board to offer, so we eat up more than the careful not to be the fun. In this long process, the meat deep Qin in the bamboo shoots, drawing on the bacon and broth of spring bamboo shoots to eat up and fragrant, and even created a kind of fresh meat aftertaste. Bacon will be carefully and spring bamboo shoots together to eat, bite a small mouth, followed by stuffed into a large piece of spring bamboo shoots into the mouth, “carbazole carbazole”, bamboo shoots in the light and crisp occasionally suck out a trace of bacon taste, Shades the most affordable.

Thought it was a big pot stewed steaming, you can eat unscrupulous, but in fact it is a considerable restraint of the dish, that gulp boiled in the broth with elastic meat, attractive and dangerous, a little lust, it will be salty Meat heavy salt 齁 was raspberry, only dare a small mouth to eat a small mouth, and must be accompanied by spring shoots to do. That the meat and bamboo shoots of the soup do not have to mention, completely unable to import, and later learned that bacon stew spring bamboo shoots, the soup will be more stew more salty, so that bamboo shoots are generally left, used for burning eggplant or stew other vegetables, bamboo shoots Fresh taste into the broth, become a higher order of the soup, drink bamboo shoots so become unpredictable. 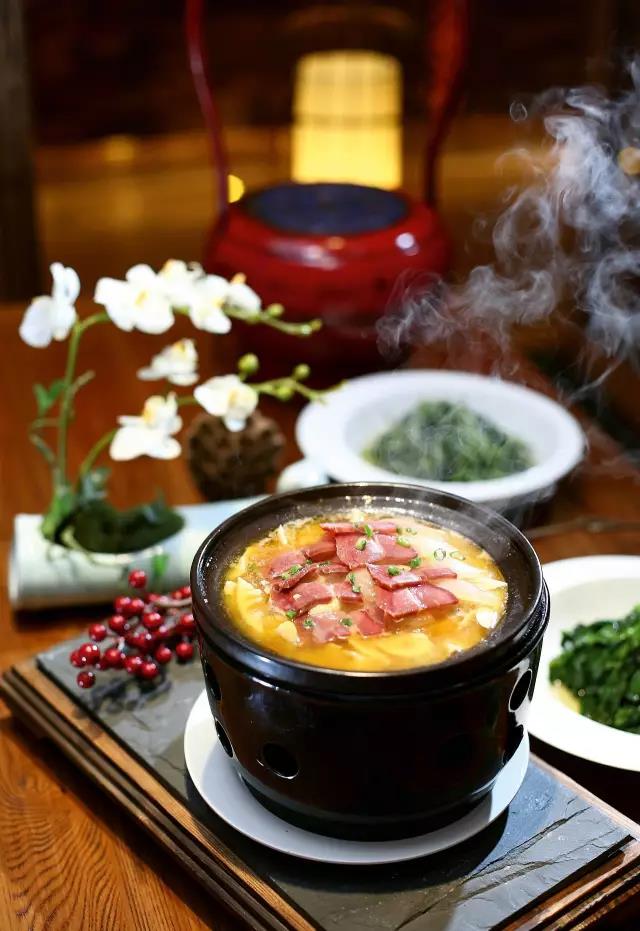 The whole process itchy intolerable, Huizhou old house in the cold walls of the deep house, the huddle around the bamboo fire bucket heating, in front of the bacon spring bamboo shoots still to be tied to eat. Years have passed, think of that cautious delicious taste, is still want to say is still nostalgia.


Even the heavy oil heavy fire for the characteristics of the Anhui cuisine, to the city, but also immediately changed their faces. In the Tunxi hotel, the chef changed the bacon into the ham, and spring bamboo shoots together, the practice is similar to the Huizhou cuisine chopper fragrance. Storage of more than one year of ham than the taste of bacon more mellow, before making, has been soaked for six or seven hours, soak the ham in the salty, half a bowl of semi-fat cut into thin slices, below the shredded spring shoots, put together In the camphor wood on the steamed, steamed only after taking the ham on the table, and must be hot to eat only fragrant. Ham really has a strong fresh taste, although the bamboo shoots did not come to the table, but the taste of bamboo shoots have been sucked into the meat, which has long been lost fresh ham with live meat aroma. This dish with spring and spring at the turn of the spring bamboo shoots taste the best, but this time the spring bamboo shoots are also the most important astringent, must be boiled before use, which also reflects the complexity of the spring bamboo shoots, crisp and tender, but also astringent edge The 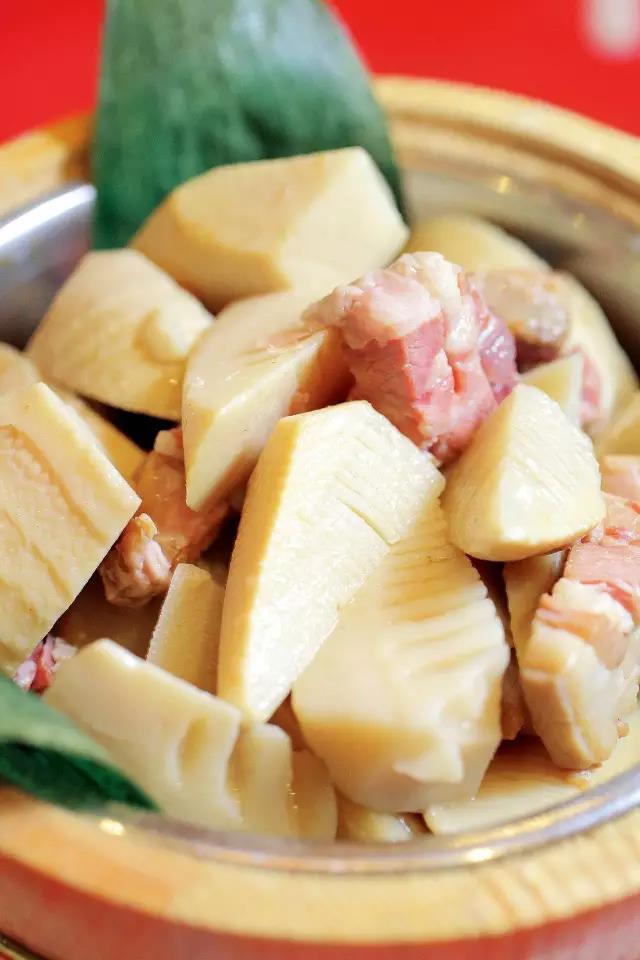 To the taste of light Jiangsu and Zhejiang area, but also that spring bamboo and meat together with each other by the most classic taste. In addition to pickled truffles, there are soy sauce to steamed bamboo shoots. Sauce cooked in advance, which in addition to salt and sugar, be sure to use the taste of the soy sauce was fried. After the meat is cooked and cut into pieces, the meat is obviously dried and then soaked in the sauce tank for three or four days, and then the sun is sunk, at least three sunny days, the meat will emit the aroma of the sun. They often do fish 鲞 steamed bamboo shoots. Fish and bamboo shoots together with the pot of steaming, put the raw material half of the water, cook for a while, the water almost dry like, even the salt are not put. Casserole steamed directly on the side, and spring bamboo shoots cut into almost the size of the block, 鲞 in the above, springing neatly placed in the bottom. From the bottom out of a bamboo shoots to eat, really understand the taste of this kind of fresh and aging combination of how delicious. 鲞 unique fish aroma sinking into the bamboo shoots, bamboo shoots also have their own fresh, eat the last mouth to recollection of the smell is 鲞.

Jiangsu and Zhejiang area only Hangzhou, the practice of bamboo shoots are different, that is, oil stew spring bamboo shoots, materials are used in the heroic boldness of the North. Near Lin’an, Anji have the best quality spring shoots, reclaim fresh. The beauty of the stewing bamboo shoots is not to Zhuo water approach to astringent taste, cut hobs, the hot pot, down the shoots into the stir-fry, fry the edge of the bamboo shoots turn yellow, so astringent taste to remove, compared with Zhuo water , Moisture naturally kept a lot. Followed by a small fire slowly stew, soy sauce, sugar, salt, vinegar mixed seasoning, add a little bit of water, stew until the juice so far. 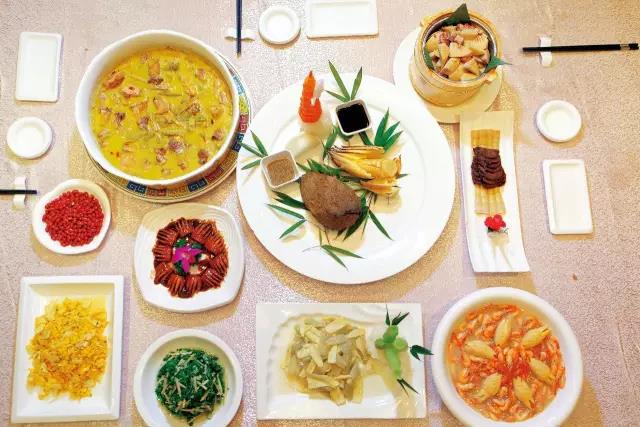 Look at the stove of the stall of the posture, which there are Wu Shan Xizi’s show, obviously a school of rough rush. Look at the color is indeed like the practice of the North, spring bamboo shoots and even the sauce of the shade of vegetables, but also a taste of taste and completely not thought that the original will be hot salty, can be an eyebrows immediately opened, Salty, sweet are in, but not so enough, who can not suppress the fresh taste of bamboo shoots, eat up the taste is very mild. Hangzhou, the old vegetables followed a lot of the Southern Song Dynasty from the north into the practice of oil stew spring shoots is a typical representative, but the amount of sugar is one-third of the north, the amount of rice vinegar is a quarter of the north, so the whole The dish looks like the color is red, the taste is light, will not let people eat very tired and very tired. There is a key to soy sauce, a Hangzhou old chef with the local people’s self-confidence told me, “to the field and peer to do the exchange, how to do stewed bamboo shoots did not do well in Hangzhou, because soy sauce is not ah, Hangzhou soy sauce Is fermented, blending is simply immeasurably.

Hangzhou, there is a similar style of the old food fire whip shoots, is the tip of the whip bamboo shoots section into four sections, with cooked lard, chicken soup first stir after the stew, cooked on the slow fire, the thin hook Layer gravy, and then sprinkle with cooked ham, pour the chicken pan. Made out of bamboo shoots pleasing to the eye, smell fragrant taste heavy, but it is refreshing to eat crisp. Is also quite close to the northern practice of a spring bamboo shoots dishes.

Speaking, the North is indeed a good blessing to enjoy the wonderful spring bamboo shoots, because the preservation of bamboo shoots is too difficult. Bamboo shoots is a bud, itself is the most productive part of the plant body life activities, but also in the above cut a large wound, the difficulty of fresh and other fruits and vegetables is quite different. Now the best way is to use low-temperature cold chain transport, but the transportation costs and transportation are very high, I rarely see spring bamboo shoots in Beijing, occasionally spent a few times to buy a big price in vain, Moreover, once you eat Jiangnan Fresh bamboo shoots taste, Beijing to buy the flash and it is difficult to make you fool.