“You went off from the ball in a hurry last night, Leslie. Why did you
not stop for me?”

It was Carl Muller who spoke. He had come into Mr. Dane’s rooms the
morning after the ball and found him sitting over a cup of coffee,
looking haggard and weary in the clear light of day.

“Excuse me, Carl,” he responded. “The actual truth is, I forgot you. I
was tired and wanted to come away, and I did so, _sans ceremonie_.”

“Well, you look fagged and tired out, that’s a fact. I never saw you
look so ill. Have a smoke; it will clear the mist from your brain.”

“Thank you, no,” said the artist, briefly.

Carl sat down on a chair and hummed a few bars of a song while he
regarded his friend in some surprise at his altered looks.

“I was sorry you went off without me, last night,” he said presently.
“I wanted to chaff you a little. Weren’t you surprised and abashed when
you found that the old woman whose portrait you declined to paint was
the loveliest angel in the world?”

“It was quite a surprise,” Mr. Dane said, sipping his _cafe au lait_
composedly.

“Did you ever see such a beautiful young creature?” continued Carl,
with enthusiasm.

“Yes,” was the unexpected reply.

“You have!” exclaimed Carl; “I did not think it possible for two such
divinities to exist upon this earth. Have the goodness to tell me where
you ever saw Mrs. Carlyle’s equal in grace and loveliness.”

But Mr. Dane, who but seldom descended to Carl’s special prerogative,
poetry, sat down his cup and slowly repeated like one communing with
himself:

“‘I remember one that perished; sweetly did she speak and move;
Such an one do I remember, whom to look at was to love.'”

“She is dead to me,” was the bitter reply.

And with a significant look Carl repeated the lines that came next to
those that Leslie had quoted:

“‘Can I think of her as dead, and love her for the love she bore?
No, she never loved me truly; love is love forevermore.'”

“Forevermore,” Leslie Dane repeated with something like a sigh.

He rose and began to pace the floor with bowed head and arms folded
over his breast.

“Carl,” he said suddenly, “I have had enough of Paris. Have you?”

“What, in seven days? Why, my dear fellow, I have just begun to enjoy
myself. I have only had a taste of pleasure yet.”

“I am going back to Rome to-day,” continued Leslie.

“I should like to know why you have made this sudden decision,
Leslie–for it is sudden, is it not?” asked Carl, pointedly.

“Yes, it is sudden,” he answered, constrainedly, “but none the less
decisive. Don’t try to argue me out of it, Carl, for that would be
useless. Believe me, it is much better that I should go. I want to get
to work again.”

“There is something more than work at the bottom of this sudden move,”
said Carl Muller, quietly. “I don’t wish to intrude on your secrets,
_mon ami_, but I could tell you just why you are going back to Rome in
such a confounded hurry.” 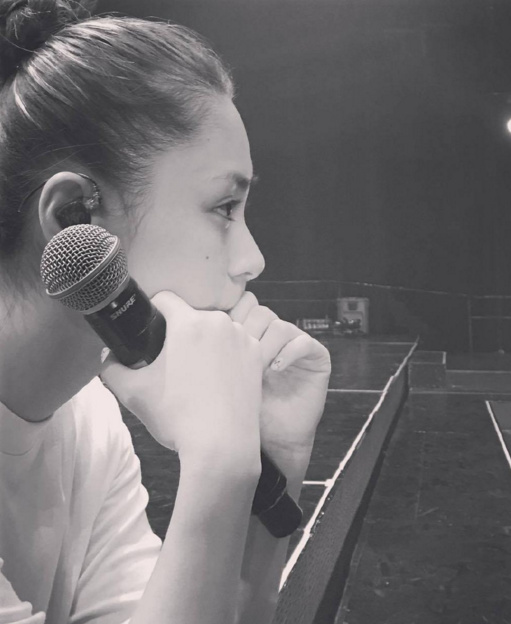 “You could?” asked Leslie Dane, incredulously.

“You know I told you long ago, Leslie, that there is a woman at the
bottom of everything that happens. There is one at the bottom of this
decision of yours. You are running away from a woman!”

“The deuce!” exclaimed Leslie, startled out of his self-control by Carl
Muller’s point-blank shot; “how know you that?”

“I can put two and two together,” the German answered, coolly.

Leslie looked at him with a question in his eyes.

“Shall I explain?” inquired Carl.

“Well, then, last night, when we laid aside our masks I happened to
be quite near to our lovely hostess, and a friend who was beside me
immediately presented me.”

“I was immediately impressed with the idea,” continued Carl, “that
I had met Mrs. Carlyle before. The impression grew upon me steadily
during the minute or two while I stood talking to her, although I could
not for the life of me tell where I had met her. But after I had left
her side I stood at a little distance and observed her presentation to
you.”

Leslie Dane walked away to a window and stood looking out with his back
turned to his friend.

“I saw her look at you, Leslie,” Carl went on, “and that minute she
fell back and fainted. They said that she struck her head against the
_jardiniere_, which caused her to faint. But I know better. She may
have struck her head–I do not dispute that–but the primal cause of
her swoon was the simple sight of _you_!”

“I do not know why you should think so, Carl,” said his friend, without
turning round. “It is not plausible that the mere sight of a stranger
should have thus overcome her. Am I so hideous as that?”

“You were not a stranger,” said Carl, overlooking the latter query,
“for in that moment when she bowed to you it flashed over me like
lightning who she was. I was mistaken when I thought I had met her
before. She was utterly a stranger to me. But I had seen her peerless
beauty portrayed in a score of pictures from the hand of a master
artist. It is no wonder the resemblance haunted me so persistently.”

There was silence for a minute. Leslie did not move or speak.

“Leslie, you cannot deny it,” Carl said, convincingly: “the beautiful
Mrs. Carlyle is the original of the veiled portrait you used to keep in
your studio, and which you allowed me to look at only on the occasion
when you painted it out.”

“This, _mon ami_–she was false to you! I do not know in what way, but
possibly it was by selling herself for that old man’s gold. You owe her
no consideration. Why should you curtail your holiday and disappoint
your friends and admirers merely because her guilty conscience feels
a pang at meeting you? You two can keep apart. Paris is surely large
enough for both to dwell in without jostling each other.”

What Leslie Dane might have answered to this reasoning will never be a
matter of history, for before he could open his lips to speak there was
a thundering rap at the door.

In some suspense he advanced and threw it open.

Three or four officers of the French police, in their neat uniform,
stood in the hallway without.

“Enter, gentlemen,” he said, courteously, though there was a tone of
surprise in his voice that they could not mistake.

Carl Muller, too, though he did not speak, rose from his seat and
expressed his amazement by his manner.

The officers filed into the room gravely, closing the door after them.
Then the foremost one advanced, with an open paper in his hand, and
laid his hand firmly but respectfully on Leslie Dane’s arm.

“Monsieur Dane,” he said, in clear, incisive tones that fell like a
thunder-clap on the hearing of the two artists–“Monsieur Dane, I
arrest you for the willful murder of Francis Arnold at his home in
America three years ago!”