In the corridor of Memorial Hospital, Doctor Alcott confirmed the
information the Scouts had been given—Old Stony had suffered a heart
attack and was not expected to live.

“Yes, and his mind remains alert. He has been asking repeatedly for the
Scouts. That’s why we sent for you. Sorry to bother you, but it seems to
mean a lot to the old man. Something appears to be on his mind.”

“Yes, but it would be better if only two of you see him, and don’t stay
long.”

Accordingly, while the others waited in the downstairs lobby, Hap and
Jack followed a nurse into the ward. A screen had been set up at Old
Stony’s bed to provide a measure of privacy.

As Mr. Livingston and Jack paused beside him, the old fellow opened his
eyes and managed to grin feebly.

“How are you feeling?” Jack asked, because he could think of nothing
else to say.

“Not so hot,” Old Stony returned. His bloodless fingers plucked at the
sheet. “Reckon I’m about ready to mount my pale white horse and ride to
the last roundup.”

“Not at all,” Mr. Livingston tried to reassure him. “In a few days
you’ll snap out of this. There’s fighting spirit in you, Stony.”

“Ah, there’s fight, but the old ticker’s getting mighty tired.”

Stony closed his eyes and for several minutes seemed almost to forget
his visitors. They were debating whether or not to slip away quietly,
when he aroused himself again.

“Pull up your chairs and listen close,” he said. “I’ve got to tell you
something important.”

“Are you sure you feel strong enough to talk?” Mr. Livingston inquired
doubtfully, as he and Jack brought their chairs to the bedside.

“Fiddlesticks! If it takes my last breath, I have to get this off my
chest. Now, listen close, because I’m winding up to tell you the true
story o’ why I never went back to Colorado to live on my hard-earned
gold.”

Jack and Hap exchanged a quick glance. Would the old man tell them
another wild tale, they wondered? Or would this story, in all
probability his last, be a true one?

“Don’t be wasting time trying to find any of my family after I’ve kicked
off.”

“You have no relatives?”

“How about your friend in Colorado?” Jack suggested. “I think Jarrett
Walz said his name was Craig Warner.”

Old Stony rolled his head on the pillow. “That snooping rascal!” he
muttered. “He’s been in my things since they carted me off here!”

“I’m afraid he has,” Mr. Livingston admitted. Fearful of agitating the
old man, he did not tell him the extent to which the motel owner had
gone through his personal papers.

“You write to him sometimes?” Mr. Livingston suggested.

“Now and then I scratch him a line. I’m not much on writing, and he
isn’t much on answering. Haven’t heard from him in more’n three years
now.”

“If he’s not a friend, why write?” Jack asked, puzzled.

“It’s because of my past. Craig doesn’t know this—he thinks I’m Hank
Stone, a screwball prospector. That’s the way I want it. But the reason
I kept in touch all these years is because he’s the only son o’ my old
podner, John Warner.”

The effort of talking had tired Old Stony. He lay a while with eyes
closed and then continued.

“I’m not one to deal from the bottom of a deck. I’m honest, I am. That’s
why I’ve never trusted Jarrett Walz. Maybe I’m being unfair. He gave me
a job, and for that I’m grateful. But I’d never trust him with my
secret.”

“About the gold?” Jack prodded.

Old Stony nodded. “I’ll start at the beginning,” he went on. “’Twas back
in the early 1900’s. I don’t exactly recollect the date. My podner, John
Warner, and I got ourselves enough grub to last three months. Then we
hit for the valley we later named Headless Hollow.”

“Where was it?” Mr. Livingston asked. “West of Denver?”

“Ay, it’s hard by a mountain where even to this day gold has never been
struck—at least, word of it hasn’t hit the papers.”

“Most of the old gold fields are known—” Mr. Livingston started to say.

The old man broke in: “Headless Valley is hard to get at. The vein my
podner and I found is rich, but it isn’t extensive enough to make it
worth while hauling in expensive mining equipment. So I reckon engineers
have given it the go-by.”

“But you and your partner really found gold there?” Jack asked, rather
impressed.

“We sure did. And then our troubles began. All that summer we worked
till our hands were blistered. We stacked the ore in two caches—one big
and one little. Our food began to run low. We knew we had to get out
fast before winter set in, but the gold held us. And then—”

Old Stony shuddered and seemed unable to go on. But with an effort, he
forced himself to resume:

“So far as we knew, there weren’t any human beings within forty miles of
Headless Valley. We never set eyes on a soul all that summer. But one
morning my podner showed up missing. I found him by the diggings, dead
with a bullet hole through the back of his head.”

“What did you do?” Jack asked, becoming more engrossed.

“I buried him not far from the little cabin we had built. Marked the
grave with his name too.” 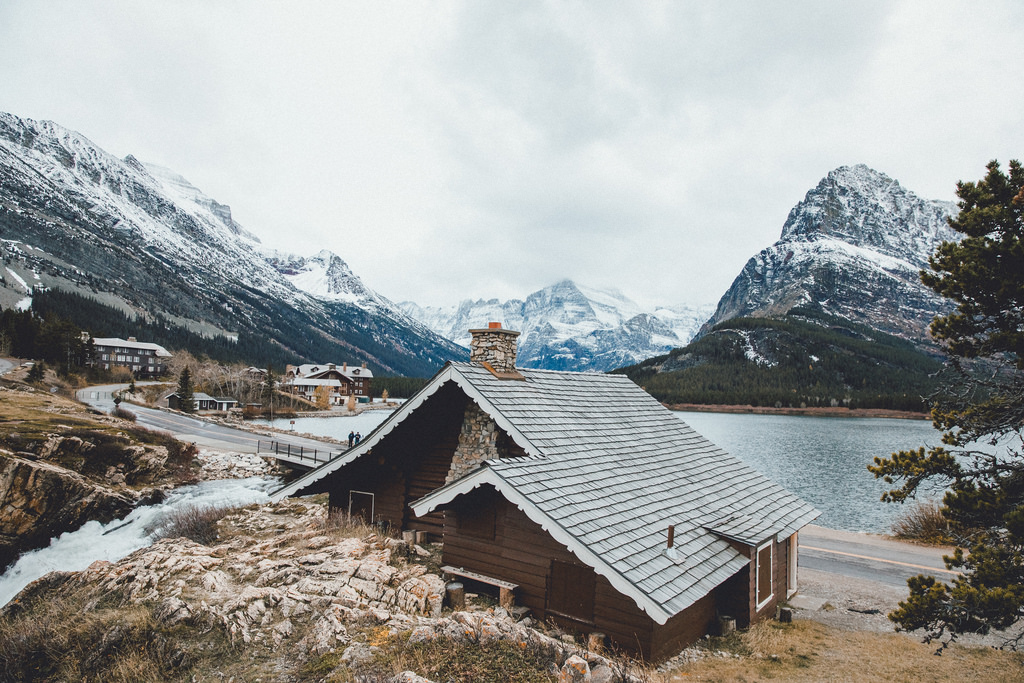 “All these years I’ve been asking myself that same question. Indians, I
reckon. Maybe Headless Hollow was sacred ground to ’em, and they didn’t
like us messing around.”

“The killing wasn’t because of the gold?”

“Reckon not,” Old Stony replied to the Scout leader’s inquiry. “Nary a
nugget was touched. I’m telling you, after poor John got his, I was
plumb scared. I couldn’t see anybody around, but I could feel ’em. Sort
o’ like ghosts.”

“Danged right they don’t! I figured I’d be next if I didn’t light out o’
there. I took a few of the nuggets that I could carry in a bag and hit
the trail. Doggone near froze to death before I finally got back to the
nearest town.”

“Yeah, and I reckon it’s still there today. At least, I don’t think
those caches would ever be found, unless by somebody who was watching
us, or by Indians.”

“Why didn’t you go back later?” Mr. Livingston asked.

Old Stony heaved a heavy sigh. “Figured you’d ask me that one. Reckon
I’ve got to answer true. When I got back—well, folks began whispering
that I was the one that did for poor old John. They said I shot him so I
could have the claim all to myself.”

“I fooled ’em. Told ’em a mess of lies that led ’em packing in the wrong
direction.” Old Stony grinned at the recollection. “They sure were
burned up! So to even the score, they got out a warrant charging me with
poor John’s murder. That was when I lit out.”

“I sure did. First I went to California and lost my grubstake there.
Then I drifted back to Arizona, then on here to New Mexico. Always
figured some day I’d go back to Headless Hollow. But the years came on
too fast, and before I knew it, I was an old man and my last chance was
gone.”

By this time, Jack and Mr. Livingston were convinced that Stony’s story
was at least half truth. As for his gold, they were of the opinion that
the one hoarded nugget that Walz had must have represented his entire
fortune.

Therefore, it came as a surprise when the old man went on: “Now I’m
coming to the kernel o’ the nut. I reckon I owe poor old John a debt.
Half of that gold I took out of Headless Hollow I figured was his. I’ve
kept that half—never touched it, even when I didn’t know where my next
mouthful of meat was coming from. Now I want that gold to go to John’s
son, Craig Warner.”

Jack and Mr. Livingston began to catch the drift of Stony’s thoughts, so
they were not too surprised at his request which came haltingly.

“Reckon it’s a lot to ask o’ strangers—but I have no one I can trust.
I’m asking you—after I’m gone—will you get word to Craig Warner? Take
him the map—the one that shows the true trail to Headless Hollow and the
caches of gold. They’re his by rights, and I want him to have ’em.”

“Where is this map?” Mr. Livingston asked, trying not to show that the
strange request troubled him.

Old Stony leaned over to the edge of the bed, lowering his voice to a
whisper.

“You’ll find it under the stones—fireplace—my cabin.”

“We’ll be glad to look,” Mr. Livingston promised. “Where are we to find
Craig Warner?”

“His address is in my box of papers—under the bed.”

The lengthy conversation had greatly wearied Old Stony but, when Jack
and Mr. Livingston started to leave, with a feeble gesture of his hand
the prospector waved them back.

“Just one thing more,” he said, his voice husky. “The gold—Craig
Warner’s share—you’ll find it—”

A nurse had come to the bedside. With a quick glance at the patient, she
told the two visitors they had to leave at once.

Old Stony summoned all his failing strength. Gazing steadily at Jack and
Hap, he said clearly: “The bag of pinto beans. The bag of beans. You
understand?”

To satisfy the dying old man, the two visitors nodded. Stony fell back
on the pillow, a smile on his thin lips.

“I’ve said my piece,” he whispered. “Now I’m ready for the long trip
over the range. God be with you.”