“It is a dreadful thing to be poor a fortnight before Christmas,” said
Clorinda, with the mournful sigh of seventeen years.

Aunt Emmy smiled. Aunt Emmy was sixty, and spent the hours she didn’t
spend in a bed, on a sofa or in a wheel chair; but Aunt Emmy was never
heard to sigh.

“I suppose it is worse then than at any other time,” she admitted.

That was one of the nice things about Aunt Emmy. She always
sympathized and understood.

“I’m worse than poor this Christmas … I’m stony broke,” said
Clorinda dolefully. “My spell of fever in the summer and the
consequent doctor’s bills have cleaned out my coffers completely. Not
a single Christmas present can I give. And I did so want to give some
little thing to each of my dearest people. But I simply can’t afford
it … that’s the hateful, ugly truth.”

“The gifts which money can purchase are not the only ones we can
give,” said Aunt Emmy gently, “nor the best, either.”

“Oh, I know it’s nicer to give something of your own work,” agreed
Clorinda, “but materials for fancy work cost too. That kind of gift is
just as much out of the question for me as any other.”

“That was not what I meant,” said Aunt Emmy.

“What did you mean, then?” asked Clorinda, looking puzzled.

“Suppose you think out my meaning for yourself,” she said. “That would
be better than if I explained it. Besides, I don’t think I _could_
explain it. Take the beautiful line of a beautiful poem to help you in
your thinking out: ‘The gift without the giver is bare.'”

“I’d put it the other way and say, ‘The giver without the gift is
bare,'” said Clorinda, with a grimace. “That is my predicament
exactly. Well, I hope by next Christmas I’ll not be quite bankrupt.
I’m going into Mr. Callender’s store down at Murraybridge in February.
He has offered me the place, you know.”

Clorinda flushed. There was a note in Aunt Emmy’s voice that disturbed
her.

“Oh, yes, I suppose she will,” she answered hurriedly. “But she’ll get
used to it very soon. And I will be home every Saturday night, you
know. I’m dreadfully tired of being poor, Aunt Emmy, and now that I
have a chance to earn something for myself I mean to take it. I can
help Aunt Mary, too. I’m to get four dollars a week.”

“I think she would rather have your companionship than a part of your
salary, Clorinda,” said Aunt Emmy. “But of course you must decide for
yourself, dear. It is hard to be poor. I know it. I am poor.”

“You poor!” said Clorinda, kissing her. “Why, you are the richest
woman I know, Aunt Emmy–rich in love and goodness and contentment.”

“And so are you, dearie … rich in youth and health and happiness and
ambition. Aren’t they all worth while?”

“Of course they are,” laughed Clorinda. “Only, unfortunately,
Christmas gifts can’t be coined out of them.”

“Did you ever try?” asked Aunt Emmy. “Think out that question, too, in
your thinking out, Clorinda.”

“Well, I must say bye-bye and run home. I feel cheered up–you always
cheer people up, Aunt Emmy. How grey it is outdoors. I do hope we’ll
have snow soon. Wouldn’t it be jolly to have a white Christmas? We
always have such faded brown Decembers.”

Clorinda lived just across the road from Aunt Emmy in a tiny white
house behind some huge willows. But Aunt Mary lived there too–the
only relative Clorinda had, for Aunt Emmy wasn’t really her aunt at
all. Clorinda had always lived with Aunt Mary ever since she could
remember.

Clorinda went home and upstairs to her little room under the eaves,
where the great bare willow boughs were branching athwart her windows.
She was thinking over what Aunt Emmy had said about Christmas gifts
and giving.

“I’m sure I don’t know what she could have meant,” pondered Clorinda.
“I do wish I could find out if it would help me any. I’d love to
remember a few of my friends at least. There’s Miss Mitchell … she’s
been so good to me all this year and helped me so much with my
studies. And there’s Mrs. Martin out in Manitoba. If I could only send
her something! She must be so lonely out there. And Aunt Emmy herself,
of course; and poor old Aunt Kitty down the lane; and Aunt Mary and,
yes–Florence too, although she did treat me so meanly. I shall never
feel the same to her again. But she gave me a present last Christmas,
and so out of mere politeness I ought to give her something.”

Clorinda puzzled over Aunt Emmy’s meaning for four days and part of
three nights. Then all at once it came to her. Or if it wasn’t Aunt
Emmy’s meaning it was a very good meaning in itself, and it grew
clearer and expanded in meaning during the days that followed,
although at first Clorinda shrank a little from some of the
conclusions to which it led her.

“I’ve solved the problem of my Christmas giving for this year,” she
told Aunt Emmy. “I have some things to give after all. Some of them
quite costly, too; that is, they will cost me something, but I know
I’ll be better off and richer after I’ve paid the price. That is what
Mr. Grierson would call a paradox, isn’t it? I’ll explain all about it
to you on Christmas Day.”

On Christmas Day, Clorinda went over to Aunt Emmy’s. It was a faded
brown Christmas after all, for the snow had not come. But Clorinda
did not mind; there was such joy in her heart that she thought it the
most delightful Christmas Day that ever dawned.

She put the queer cornery armful she carried down on the kitchen floor
before she went into the sitting room. Aunt Emmy was lying on the sofa
before the fire, and Clorinda sat down beside her.

“I’ve come to tell you all about it,” she said.

Aunt Emmy patted the hand that was in her own.

“From your face, dear girl, it will be pleasant hearing and telling,”
she said. 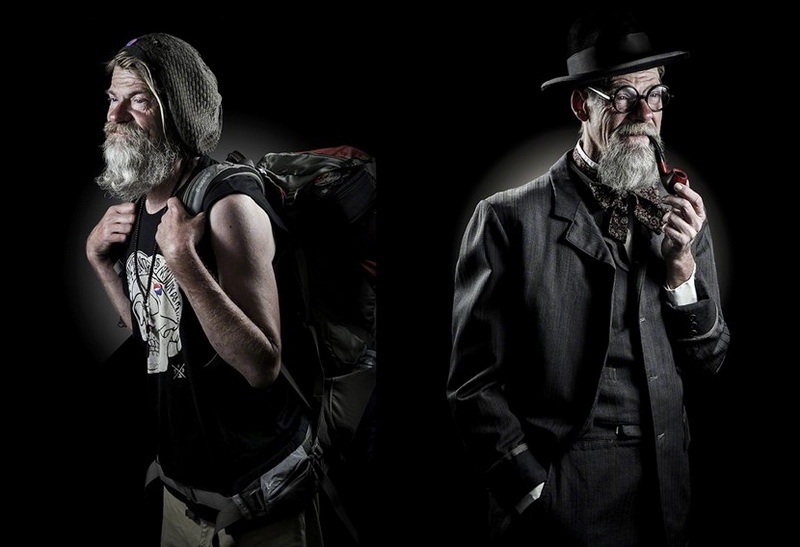 “Aunt Emmy, I thought for days over your meaning … thought until I
was dizzy. And then one evening it just came to me, without any
thinking at all, and I knew that I could give some gifts after all. I
thought of something new every day for a week. At first I didn’t think
I _could_ give some of them, and then I thought how selfish I was. I
would have been willing to pay any amount of money for gifts if I had
had it, but I wasn’t willing to pay what I had. I got over that,
though, Aunt Emmy. Now I’m going to tell you what I did give.

“First, there was my teacher, Miss Mitchell. I gave her one of
father’s books. I have so many of his, you know, so that I wouldn’t
miss one; but still it was one I loved very much, and so I felt that
that love made it worth while. That is, I felt that on second thought.
At first, Aunt Emmy, I thought I would be ashamed to offer Miss
Mitchell a shabby old book, worn with much reading and all marked over
with father’s notes and pencillings. I was afraid she would think it
queer of me to give her such a present. And yet somehow it seemed to
me that it was better than something brand new and unmellowed–that
old book which father had loved and which I loved. So I gave it to
her, and she understood. I think it pleased her so much, the real
meaning in it. She said it was like being given something out of
another’s heart and life.

“Then you know Mrs. Martin … last year she was Miss Hope, my dear
Sunday School teacher. She married a home missionary, and they are in
a lonely part of the west. Well, I wrote her a letter. Not just an
ordinary letter; dear me, no. I took a whole day to write it, and you
should have seen the postmistress’s eyes stick out when I mailed it. I
just told her everything that had happened in Greenvale since she went
away. I made it as newsy and cheerful and loving as I possibly could.
Everything bright and funny I could think of went into it.

“The next was old Aunt Kitty. You know she was my nurse when I was a
baby, and she’s very fond of me. But, well, you know, Aunt Emmy, I’m
ashamed to confess it, but really I’ve never found Aunt Kitty very
entertaining, to put it mildly. She is always glad when I go to see
her, but I’ve never gone except when I couldn’t help it. She is very
deaf, and rather dull and stupid, you know. Well, I gave her a whole
day. I took my knitting yesterday, and sat with her the whole time and
just talked and talked. I told her all the Greenvale news and gossip
and everything else I thought she’d like to hear. She was so pleased
and proud; she told me when I came away that she hadn’t had such a
nice time for years.

“Then there was … Florence. You know, Aunt Emmy, we were always
intimate friends until last year. Then Florence once told Rose Watson
something I had told her in confidence. I found it out and I was so
hurt. I couldn’t forgive Florence, and I told her plainly I could
never be a real friend to her again. Florence felt badly, because she
really did love me, and she asked me to forgive her, but it seemed as
if I couldn’t. Well, Aunt Emmy, that was my Christmas gift to her …
my forgiveness. I went down last night and just put my arms around her
and told her that I loved her as much as ever and wanted to be real
close friends again.

“I gave Aunt Mary her gift this morning. I told her I wasn’t going to
Murraybridge, that I just meant to stay home with her. She was so
glad–and I’m glad, too, now that I’ve decided so.”

“Your gifts have been real gifts, Clorinda,” said Aunt Emmy.
“Something of you–the best of you–went into each of them.”

Clorinda went out and brought her cornery armful in.

“I didn’t forget you, Aunt Emmy,” she said, as she unpinned the paper.

There was a rosebush–Clorinda’s own pet rosebush–all snowed over
with fragrant blossoms.

Aunt Emmy loved flowers. She put her finger under one of the roses and
kissed it.

“It’s as sweet as yourself, dear child,” she said tenderly. “And it
will be a joy to me all through the lonely winter days. You’ve found
out the best meaning of Christmas giving, haven’t you, dear?”

“Yes, thanks to you, Aunt Emmy,” said Clorinda softly.