In the midst of Zamora’s excitement, he evidently designed to kill
Captain Diavolo, for he had his hand on the pirate’s windpipe and choked
him until he was blue in the face.

“Tell me where Leon is,” the Mexican kept panting, furiously. “Tell me
what you have done with my child!”

“Separate them, boys,” said Frank to his friends.

Barney and Pomp carried out this order with great difficulty, as the two
fighters resented their interference.

They finally dragged Zamora away, however, and Barney exclaimed, in
wrathy tones:

“Let me get at him!” panted Zamora, furiously.

And they pinned him into a chair.

Frank in the meantime had cut the current out of the live wire for fear
of its setting fire to the carpet, and then he leveled the big pistol at
the captain, and said, sternly:

“Drop down on your knees.”

And down he went on his marrow bones, with his hands raised above his
head, and the early morning sunlight streaming through the pilot-room
windows upon his pale, haggard face.

The Jove was still mounting higher in the air, and the five men who had
been with the captain and jumped overboard had now vanished from view in
a dense thicket.

Three miles away to the southward lay the sparkling waters of the
Mexican Gulf.

“Barney, bind this man,” said Frank, “and then we may learn where he has
his ships and stronghold, and the little boy prisoner.”

“What do you intend to do with me?” asked the prisoner, uneasily.

“You will see when the proper time comes,” Frank replied.

Barney quickly had him secured.

There was a sullen look upon his face as he sat on the floor glaring up
at his captors, and he exclaimed:

“If you imagine you can induce me to tell you any of my secrets, you
will find yourself wofully mistaken.”

“On the contrary,” replied Frank, with a smile of confidence, “you will
impart to me all the information I desire.”

“Death itself has no terrors for me——”

“But living torture may.”

This was just what he feared.

“I see I’ve touched your weak point,” he remarked.

The captain made no reply, but a sullen look settled upon his hang-dog
face, and he gnashed his teeth.

“Shall I bate ther head av him?” asked Barney, cheerfully.

“No,” replied Frank; “but you can fasten the end of that copper wire
around his neck.”

A veritable howl escaped the pirate when Barney carried out Frank’s
instructions, for he had had a sample of the wire, and knew what to
expect.

“For pity’s sake, don’t let me suffer that again,” he begged.

“As long as you answer my questions,” said Frank, “I will do you no
harm; refuse, and you will get a shock fully ten times stronger than the
first one.”

“Speak! What shall I tell you?”

“First, where are we to find Leon Zamora?”

“At my retreat,” was the reluctant reply.

“How many men have you?”

“One hundred and fifty.”

“Two schooners and a steamer.”

“All manned and armed?”

“Yes. Each has a crew of thirty or forty men, and carries guns.”

“Where are these vessels?”

“Two are cruising and one is at my stronghold.”

“Tell me where your retreat is.”

“A few miles from Santa Anna.”

“Over fifty, and the wives of all hands.”

Frank questioned him further, and learned a great many points about the
pirates.

He realized several times that the captain lied and evaded his
questions, but, upon the whole, he had learned nearly all he wanted to
know.

In conclusion he asked the captain:

“How did you and your men happen to find this machine?”

“We were passing here by chance on our way to our settlement, when we
caught view of her, and came aboard.”

“No; they jumped overboard and escaped.”

Frank then ordered his two chums to lock the man up in one of the rooms,
and as they led him from the pilot-house, the Mexican said to the young
inventor:

“With that scoundrel as a hostage, we will be sure to recover my child
in exchange for him.”

“Just what I figured on,” responded Frank.

“I can pilot you to his stronghold now if you like.”

“Post me on the course, by all means,” replied Frank, eagerly; “for I
wish to go there to-morrow.”

They finally turned in and passed a peaceful night, and on the following
day Zamora posted himself at the window and gazed out.

After a brief survey of the landscape below, he cried:

“Steer to the eastward, Mr. Reade.”

Frank changed the angle of the steering plane, and the airship turned to
port, and sped along on a beam wind.

Below them laid the coast, and the storm was gone.

Not a sail was in view on the Gulf, but some leagues away the village of
Santa Anna was to be seen.

There were some reefs and keys lying off the shore, on which the sea was
breaking, and a few sea gulls skimmed through the sky beneath the Jove.

Every few minutes schools of flying fish rose from the water, fluttered
their gauzy, gleaming wings, shot across a distance of a few yards, and
plunged into the water again.

Here and there a few sparse palms sent their gaunt forms towering
skyward from the midst of arid open places, dense jungles and huge
swamps.

Finally Zamora pointed ahead and said:

“There is the pirates’ stronghold.” 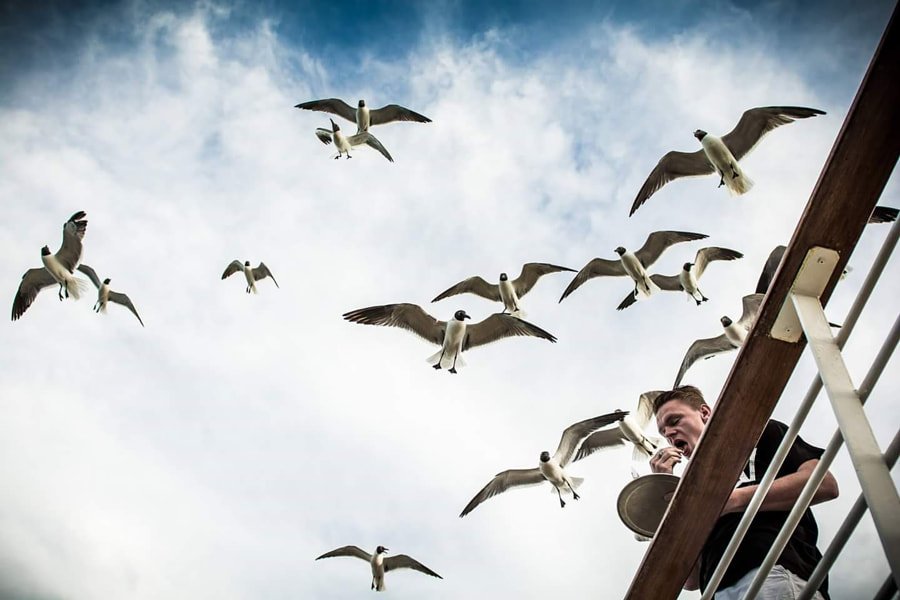 As he looked down he observed a large land-locked lagoon which was fed
by a long creek from the Gulf.

Along the creek on both sides were several forts with powerful guns
mounted behind stout walls of masonry.

It would be impossible for a ship hostile to the pirates to traverse the
creek without being destroyed before it could reach the lagoon.

Moreover, the creek was so shallow that only vessels of light draught
could pass up or down; hence war ships of almost any type could not
float there.

High hills and rocks surrounded the lagoon, so that it was concealed
from the view of any one on land or sea, and vigilant sentinels were to
be seen keeping a close guard.

The village of the pirates consisted of a cluster of stone houses
planted around the head waters of the lagoon.

In their midst rose a more imposing edifice, which was evidently used by
Diavolo, and dubbed his castle.

There were numerous men, women and children thronging the narrow streets
of the village, gazing up at the airship and betraying the most intense
excitement.

As soon as Zamora saw the castle, he said:

“There’s the place where my child is confined.”

“I’m going down and try to get him,” Frank replied.

“Now?” asked the Mexican, in surprise and delight.

“Yes, now; tell the boys to arm themselves.”

Zamora hastened out and Frank stopped the propellers, whereupon the Jove
began to settle down.

As she was going down, Frank caught view of several men at a swivel gun
in one of the forts.

They were aiming the piece at the airship.

Frank rapidly made up his mind to drop a hand grenade down upon the gun
to destroy it.

Before he could carry out this plan, however, there came a sudden report
from the weapon.

A shot flew screaming up at the flying machine.

He made a rapid effort to avoid it.

But he failed to do so.

Straight at the Jove flew the shot.

It struck the planes and passed through them.

Two large holes were made in them through which the air rushed rapidly.

A cry of dismay escaped the inventor.

“They’ve crippled us!” he groaned.

In a few moments the Jove landed in the water of the lagoon with a
violent splash, and the pirates gave a yell, and rushing to their
rowboats, embarked, and pulled out to her.