Tiny spent the night in the fork of a wild plum tree. For some time
he sat thinking of his mother and Squirreltown, but his lessons in
patience and contentment had made him satisfied with his lot.

The next morning he started upon his journey, bravely following the
narrow, twisting path, ever ready to avoid danger.

[Illustration: HE WAS ABOUT TO TAKE A DRINK WHEN HE SAW WHAT HE TOOK TO
BE A FAIRY STRUGGLING IN THE WATER.]

At length he came to a brook. He was about to take a drink when he saw
what he took to be a fairy struggling in the water. She had been trying
to get out for a long time; but, finally, her wings ceased to move and
she lay very still.

Tiny, who was a good swimmer, hurried out to rescue her. He placed his
nose under her and lifted her from the water. Holding his head high, he
swam to the shore.

The fairy crawled upon a lady’s-slipper close by and flapped her wings
until they were quite dry.

“You have done me a great service,” she said. “I’ll repay you some time
when you least expect it. I can’t tell you how grateful I am.”

“Don’t try,” said Tiny, with a polite bow. “I’ve been taught to protect
the helpless, provided they are not too big for my protection. I hope
you are quite dry now.”

“Yes, I shall be able to fly back to the city as soon as I get my
breath,” she said. “I am a queen bee and I should not be out of my
hive. I left the palace this morning with several thousand followers
and was on my way to a far-off country, when, in some peculiar manner,
I fell into the water. I could not swim, so it is lucky for me that you
came by.”

“I hope that your followers will find you. They must be greatly
distressed.”

“Oh, I hope they’ll find me,” said the queen bee, as she flapped her
wings. “You see, I have thousands and thousands of children; but they
have good nurses and are never much bother. It is not hard to govern
them.”

Tiny gazed at her in surprise.

“I have been queen of a place called the City Wonderful,” she
continued. “I ruled fifty thousand subjects. We lived in a great city
with narrow streets, protected by a beehive. You don’t know what a very
busy place it was all summer long.”

“But it doesn’t seem possible that so many creatures could live
together. Just imagine fifty thousand red squirrels in one tree!”
gasped Tiny.

“That’s different,” responded the queen. “We live together in
co-operation. Each of the workers knows her work and does it without
having to be watched all the time. The workers are females, and they
are very industrious; but the drones are males, and they do not work.
They have to be driven out of the city before winter sets in, or they
would eat all our provisions. The workers toil from morning till night,
stopping up cracks in the hive with wax, carrying food to the baby
bees, and storing it away for winter. They haven’t time to play in the
summer. Each worker has six little pockets which she fills with pollen.
She uses this in making wax for the walls. As soon as the walls are
built, another set of workers make round places, or cells, in them.
Others fill the cells with honey from the honey bags they carry about
when they visit the flowers.”

“But where do the little baby bees stay?” asked Tiny.

“Oh, they stay in the empty honey cells and are watched and cared for
by their nurses until they are old enough to work,” replied the queen.
“There is much to do, but there are many classes of workers, from the
honey gatherers to the bees that stand inside the hive, fanning with
their wings to make currents of air; for without pure air the crowded
City Wonderful would not be a fit place to live in. Another set of bees
cleans out the cells after the baby bees are old enough to come out,
and others guard the gate of the city to keep away moths and other
troublesome creatures.”

“Bees are wise, sensible, industrious, and useful,” declared the
squirrel. “I should like to see the City Wonderful. I am very glad that
I have the privilege of seeing a queen bee. I wasn’t expecting such a
great pleasure.”

The queen bee said that she was equally glad to see the red squirrel,
and that she would be delighted to invite him to see the new City
Wonderful, were it not for the fact that her soldiers might make it
unpleasant for him.

“Are there many kinds of bees?” asked Tiny presently. 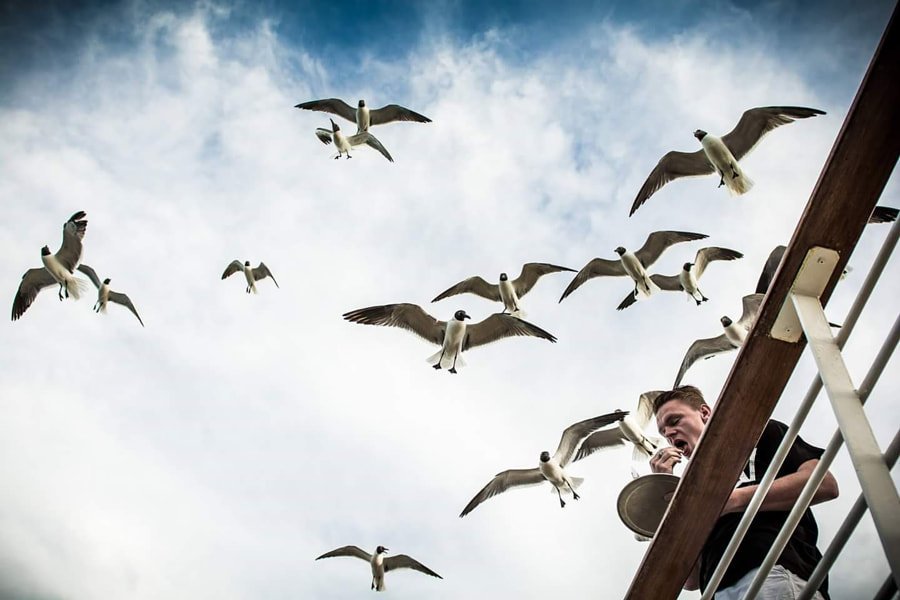 “Yes, there are fully seventy known varieties,” replied the queen,
daintily flapping her wings. “There are the plasterer bees. They make
tunnels in the ground, divide them into cells, and fill them with
honey. They have forked tongues to use as trowels in smoothing down
the silken layers which they use in making the tunnels. The flower
riflers, which are very dark in color, make their cells on dry walls.
Their homes look like lumps of mud.”

Tiny asked if all the bees live in great cities.

“Not all of them,” replied the queen, “although they are very sociable
creatures. The upholsterer bee cuts out round pieces from rose leaves,
with which she lines her tiny nest. Would it not be delightful to live
in a nest of sweet-smelling rose leaves? I should much prefer such
sweet quietude to city life. The upholsterer stores honey and pollen
that looks like rose-colored jam. I dare say it is very delicious. The
mason bees take bits of chalk, sand, and woody material, which they
make into tiny bricks to use in building their little houses. Another
kind of bee hunts for an old snail shell in which to make her house.
There is another variety that builds its nest in the heart of the
scarlet poppy. Some bees throw out sweet perfume. Although most bees
work in the sunshine, there is a class, with wings tinted like the
rainbow, that works by moonlight. You may be learned, my friend, but
I could sit here all day and tell you things about bees. You would be
much surprised at many facts I should mention. Bees, wasps, spiders,
and ants are very clever.”

Tiny said that there was nothing that could give him greater pleasure
than to hear her talk.

“But my body guard is coming,” continued the queen. “It is really an
extraordinary thing for a queen bee to be without attendants. They
must be much distressed about losing me.”

Tiny asked why she had left the City Wonderful.

“Because of family troubles,” replied the queen, somewhat ashamed.
“We lived in perfect harmony until I learned that my daughter, the
princess, would come out of her nursery cell in a few days to enter
society. Princess bees are the only ones that cause trouble. They are
fed on the finest food, and the nurses work hard to make their bodies
as smooth and comely as possible. Of course, daughters that live in
luxury and never have any responsibility are likely to be spoiled. Like
all queen bees I am in fear of the eldest princess.”

“Why?” cried Tiny in surprise.

“Oh, you don’t understand bees,” said the queen with a sigh. “When my
eldest princess comes from her nursery and is ready to go into society,
she will try to kill me. She will strive to be queen. It is always that
way with the princesses.”

“What a cruel daughter!” exclaimed the squirrel, much horrified.

“All princesses try to get the queens out of the way,” said the bee in
a sad voice. “As soon as they are big enough to rule others, they want
to control everything. So I have gotten several thousand loyal subjects
and have left the hive to build a city of my own.”

“And will a cruel princess become queen in your place?” asked Tiny.

“Yes,” was the response, “but before long she will become uneasy,
too. Her next younger sister will come out of her nursery and will
want to rule. Perhaps there will be a great contest, but doubtless
the elder princess will have to flee as I have done. She will have
fewer followers than I, and they will be called the after-swarm. Thus
jealousy goes on in the royal family all the time, but the other bees
are usually peaceable and are always busy.”

At that moment Tiny heard a buzz that sounded as though all the insects
in the world were singing together. A great swarm of bees, like a black
cloud, appeared overhead.

“I believe this must have been the first time in history that a queen
ever got away from the rest of the swarm,” said the queen bee. “I have
enjoyed this little visit so much, and I thank you a thousand times for
saving me from drowning.”

Waving her pretty wings in graceful farewell, she joined her army of
soldiers, and with buzzes of delight they carried her away.

“What a dreadful thing it is to be a ruler, in constant fear of death!”
said Tiny, gratefully. “I am glad–oh, so glad–that I am a little
common squirrel, as free as the sunbeams that light my way.”