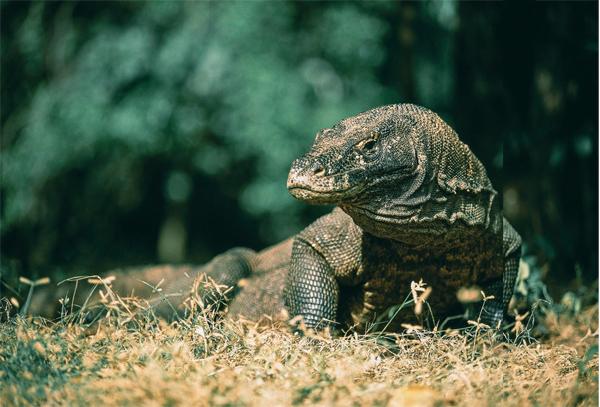 This big guy is 3 meters long and weighs 70 kilograms. It is covered with armor, the skin is as thick as a crocodile skin, and the scales cover the whole body evenly. It has a long neck and a thick limb. It walks to shake its head and shakes its head. The front legs are circled, dragging the big tail forward, and the posture of the mountain river is so beautiful that it is beautiful.

Its small round eyes looked at the square, and it spit with a tongue like a snake tongue while walking, always with saliva. This seemingly hungry predator is looking for its prey. If you look at it from the front, its nose is showing a thick and strong.

Komodo dragon is only distributed in four islands in Indonesia: Komodo, Rinca, Motang and Flores; among them, Komodo is the most distributed. They are on the verge of extinction, and the estimated survival in the wild is only 5,700.

Komodo Island is an island in the Nusa Tenggara Islands, located more than 300 kilometers east of Bali, Indonesia, and is one of the most primitive and remote islands in the world. Due to volcanic and seismic activity, the ecosystem of Komodo is isolated from other places, and the island is home to unique creatures, the most famous being the Komodo dragon.

Researchers have suggested that Komodo dragon is advanced from a smaller ancestor in the Indonesian archipelago. This huge size has evolved because there are no other carnivores competing on the island. Studies have also pointed out that this large lizard is actually from Australia. They traveled from one island to another and settled on the coast of South Indonesia. A team of international scientists unearthed a large number of fossils in eastern Australia, ranging from 300,000 years ago to more than 4 million years ago, and they were confirmed to belong to Komodo dragons.

Komodo dragons are only distributed in four islands in Indonesia.

The Komodo dragon is a carnivorous and scavenger that feeds on the island’s deer, wild boar, birds, monkeys and animal bodies. They also hunt younger ones. Komodo dragon’s saliva contains 48 kinds of bacteria, which were thought to be such that the prey could not move. In fact, Komodo dragon is toxic, its venom gland is below the lower jaw. After the prey is bitten by it, the toxins will slowly release into the blood, the blood will not coagulate, and the blood flow of the prey will not only lead to death.

Komodo dragons rarely hunt for prey, although they run very fast and can accelerate to 30 kilometers per hour. The most common practice they use is to slowly approach the prey and wait for an opportunity to bite. As long as it is a small bit, the venom can work. At this time, the big lizard of the dragonfly only needs to wait slowly, waiting for the prey to be weak, and then attacking.

Even if the prey is bitten and escaped, Komodo dragon does not have to worry. They have a sharp sense of smell and can smell carrion or prey beyond 5000 meters, so they can be captured as long as they slowly track the injured prey. They are also very sensitive to bloody smells, so it is best not to go to Komodo when there is a wound on the visitor or when the woman is in the physiological period.

Of course, Komodo dragon can become the hegemon of the island, relying on sharp teeth and amazing power. They can suppress prey through explosive power, and the thick tail can also sweep away the enemy. Of the 26 species of monitor lizards in the world, only the Komodo dragon has teeth. They can use their teeth to bite off the feet of their prey so that they can’t escape. They can also tear the neck and belly of the prey to death.

Komodo dragon has a very strong sense of territory. Each site has a ruler who will declare its absolute power by pressing on other similarities. Once confronted with challengers, fighting is inevitable. This behemoth is very powerful when it is put up, they will stand with their hind paws, and the former claws attack each other and bite each other. At first glance, there are quite two tyrannosaurus fights. Some people think that Komodo dragon is a relative of dinosaurs, but this has no scientific basis.

Komodo dragon breeds from May to August and spawns in September. The female Komodo dragon will dig holes in the ground to lay eggs, and there will be about 20 eggs in a nest. After 7 months, the young cubs will hatch. The young Komodo dragon lives on the tree to avoid hunting by other animals. They mature sexually after 3-5 years and begin to reproduce. Komodo dragons can live for 30 years.

Fengdao raises “Dragon”
The Indonesian government plans to close Komodo Island for one year from January 2020. The governor of East Nusa Tenggara said that Komodo was closed because Komodo dragon had insufficient food. The main source of food for Komodo dragon on the island is the deer, but due to human killing, the number of deer is getting smaller and less, and the food of Komodo dragon is also reduced, which leads to the mutual ingestion of Komodo dragon. .

When the villagers are hunting the deer, they will leave half of the meat for the Komodo dragon.

Their stomachs are easy to dilate and can eat up to 80% of their body weight at a time. When they eat, the jaws can be opened as much as possible to bite off large pieces of meat. Komodo dragon’s ability to swallow is very strong, can swallow all parts of the prey, including hair and hooves, can not be digested and then excreted.

Will the hungry Komodo dragon attack humans? According to the Komodo National Park in Indonesia, between 1974 and 2012, about 24 people were attacked by Komodo, most of them local residents.

In 2007, an 8-year-old boy was attacked and died of excessive blood loss. This is the first time in 33 years that Komodo Dragon caused death. In 2008, five divers were stranded on the beaches of Linka Island and attacked by Komodo Dragon. Two days later, they were taken away by the Indonesian search and rescue team. In 2009, a local resident who picked apples fell from the tree and was killed by two Komodo dragons. In the same year, a national park guide was ambushed by Komodo in the island of Rinca. 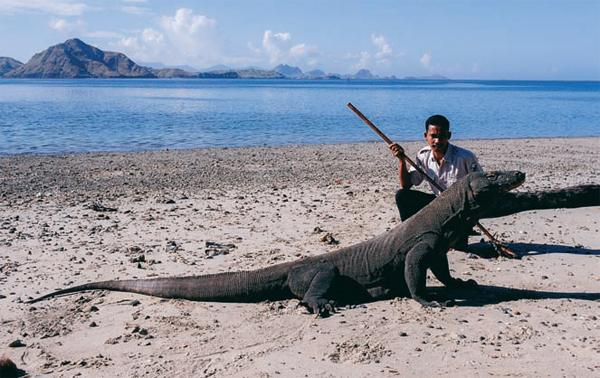 Although Komodo dragon poses a threat to local residents, local villages respect Komodo dragon and consider them to be some kind of ancestor.

Legend has it that a long time ago, there was a magical princess on Komodo Island, which she called the Dragon Princess. After the Dragon Princess got married, she gave birth to twins, one of whom was a boy and the other was a Komodo dragon. The boy was named Si Gerong and grew up in the local area. Komodo dragon was named Ora and was exiled to the jungle, so the twins did not know each other.

Many years later, Si Gerong hunt in the jungle and killed a deer. Just as he was about to extract the spoils, a large lizard rushed out of the bushes, trying to take the deer. Si Gerong desperately drove the lizard, but in vain, the big lizard stood on the body of the deer, revealing his teeth and warning the boy.

Si Gerong raised his spear and wanted to kill the lizard. In an instant, there was a beautiful woman with sparkling, she is the dragon princess. Princess Dragon tells Si Gerong that you can’t kill this animal. It is your sister Ora. You have to be on an equal foot with her. You are twin brothers and sisters.

Ora means “land crocodile”, and the shape of the Komodo dragon looks like a crocodile. Western scientists discovered Komodo dragons in 1910; in 1912, the director of the Zoological Museum of Java Bogor wrote a report to make this creature public. In 1980, Indonesia established the Komodo National Park. The national parks include the three larger islands of Komodo, Padar and Rinka and 26 other small islands with an area of ​​733 square kilometers. The Komodo National Park was established to protect Komodo Dragon, which was established as a World Heritage Site by UNESCO in 1991.

In the past, when the villagers were hunting for deer, they left half of the meat for the Komodo dragon. After the establishment of the Komodo National Park, Komodo dragons and their food deer were protected. The local villagers were banned from hunting deer, so they could no longer offer venison to the “ancestors.” The locals believe that this makes Komodo Dragon “not too happy”, so they only began to attack humans. 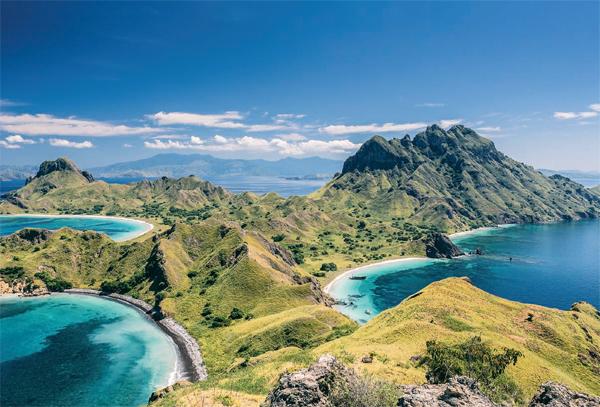 Komodo dragons are only found in Komodo, Rinca, Motang and Flores in Indonesia, and Komodo is the largest. The picture shows Komodo Island

After several communications, I found out that he was mistaken. However, there are indeed giant lizards in the Philippines. In 2010, biologists discovered a new species of lizard, the Tata Tawata, in the forest of Luzon. It is about two meters long and weighs about 10 kilograms. When it is on the tree, it changes color to hide the body. Male lizards have two penis, called “half penis,” which can be used interchangeably and fixed in female lizards during mating.

The Bitavahua monitor lizards are also close relatives of Komodo dragons, but they are much warmer than Komodo dragons. They mainly feed on fruits and are the only vegetarian lizards ever discovered. They are brightly colored and delicious, so they are often the target of human hunting. I guess what my Filipino friend had eaten, maybe the Bitatahua monitor lizard.

Komodo dragon does exist in only four islands in Indonesia. In addition to their strong hunting ability, they also have superb navigation, crawling and swimming ability. They are flexible and can move 11 kilometers a day in the native canyon. In this case, why did Komodo Dragon not migrate to other places and expand their territory?

Some researchers have captured seven Komodo dragons and placed them in different parts of the Komodo National Park, even different islands, to observe the adaptability of Komodo dragons. Studies have shown that Komodo dragon, which is placed a few kilometers away from the original island, will take several months to find the way home. But if there is a sea between the native islands, Komodo dragon will choose to settle in the new island, even if you swim for a while, you can go back.

Komodo dragon actually swims very well, but the Nusa Tenggara Islands are surrounded by strong currents, and the Komodo dragon will be caught in the sea by the current. In order to avoid risks, they are not willing to move around. Tens of thousands of years ago, Komodo dragon migrated from Australia to Indonesia, but scientists could not explain the difference in their past and present activities.

More than 4,000 residents currently live in the Komodo National Park Reserve. The reserve develops ecotourism and pays for it through tickets and travel licenses. More than 10,000 people visit national parks every month, and 95% are foreigners.

If you want to see the wild Komodo dragon, you still have to come to Komodo National Park, Indonesia. However, the ticket price is not cheap. At the end of 2018, the governor of East Nusa Tenggara proposed to increase the ticket price to 500 US dollars, compared with 200,000 rupiah (about 15 US dollars), which has increased by nearly 33. Times.

In order to see this dangerous and beautiful giant “Dragon” style, are you willing to pay for tickets?