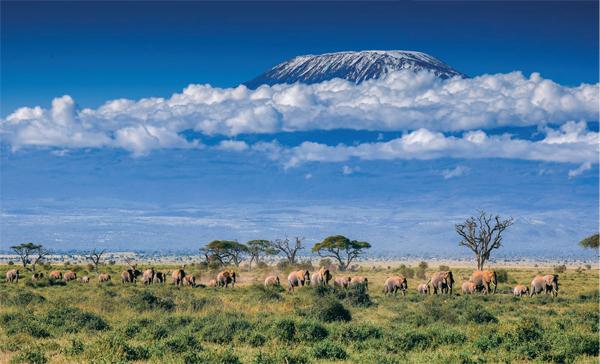 Amboseli National Park at the foot of Kilimanjaro

A black vulture nearly one meter high, perched on a dry branch next to a city street. They occasionally turn their heads, occasionally licking feathers, and occasionally hovering their wings. But most of the time, they stood there coldly, overlooking the noisy city.

When I noticed them through the window, I couldn’t help but take a breath. At that time, I landed in Nairobi, the capital of Kenya, and was heading to the B&B from the airport. In the last second, I followed the ballad in the car and swayed to the left. I was immersed in the dryness and heat that was unique to Africa. The next second, my body froze and my eyes were rounded.

Waiting for a long breath to relax from the chest, my brain can be re-spinned, I am amazed: in this hot land of East Africa, can be so close to nature.

I didn’t think of it at the time, approaching nature and embracing nature, this is just the beginning.

Safari tour
Groups of wildebeests struggled to cross the majestic and murderous Mara River, and the elephants at the foot of Mount Kilimanjaro lined up with the sunset to return home. The vultures and hyenas competed with large cats for flesh-and-blood prey, alkali. The flamingos on the water lake are layered in layers of neon.

When these heart-rending and heart-warming images come into reality from television and magazines, no one can resist the temptation of a safari journey.

More than 100 years ago, the most fashionable way to travel was to take a telescope and a shotgun to the East African prairie and take photos with the “trophy.” The then US President Theodore Roosevelt and the famous writer Hemingway were both safari enthusiasts.

Roosevelt had harvested 1,100 animals, including 17 lions, 11 elephants and 20 rhinos, in one of his “most prestigious hunting”. Today, as the ecological environment continues to deteriorate, it would be ironic to put Roosevelt and the “trophy” together with his photo of the Nobel Peace Prize.

Today, the meaning of the “safari tour” has changed. Tourists are sitting in off-road vehicles, searching for animals like hunters, holding the “long guns and short guns” of Nikon, Canon and other brands in their hands, hunting back hundreds of megabytes of pictures and videos.

With the snowy mountains as the background for watching wild animals, there is a flavor.

The gentle journey has been widely welcomed. Lonely humans visit unfinished animal partners, busy human beings enjoy the free life of the grassland, the materialized human experience returns to the natural comfort, and the arrogant humans regain the awe of the universe and life.

At the beginning of the trip, I did not have so many deep feelings. I frantically applied sunscreen and anti-mosquito cream while praying that I could see the “African Five”. Lions, elephants, rhinos, leopards, African buffaloes, these five giants living on the African grasslands, are listed as “the five major Africans.” Since coming to Africa, since the safari tour has been opened, the ultimate goal of almost every safari is to appreciate the “African Five”.

But before that, you have to endure hours of long journeys. Although the time is long, the road is bumpy, but it is not boring. Two or three hours after leaving the city, wild animals will appear from time to time on both sides of the highway. The most common are zebras and giraffes that are grazing. They also encounter a few elephants that have been walking slowly. I don’t know where they are, and I don’t know where to go.

It was already late in the evening when I went to the national park. I went to bed early for the whole day. In the middle of the night, I was awakened by an unknown bug that hurried through my clavicle. I was most afraid of insects, but I looked at the simple tents in my place and thought about the original natural African land where I was. I calmly threw it out of bed and slept again after sleeping on the blanket.

After that, every time I think of that scene, I feel that the land full of magical charm has given me courage.

Animal photographer
The day is still not bright, our team is ready to go before departure. The sun just came out of the horizon, and our off-road vehicle was rumblingly launched into the Amboseli National Park and headed for the savanna.

There are many national parks in Kenya, each with its own characteristics. Lake Nakuru National Park is a great place to watch flamingos. In addition to the pink eyes, you may also encounter low-key but arrogant black rhinoceros; the Masai Mara National Reserve is migrating from the wildebeest in July each year. In addition to the reputation, this is also the most common place in the “African Five”.

Every time it licked its long tongue, I immediately slammed it.

Because of the limited travel time, I can’t travel every national park. The reason for choosing Amboseli National Park is simple. It is at the foot of Kilimanjaro, and the snowy mountains are the background for watching wildlife. Moreover, I have long been able to see the magnificent landscape of Limazzaro.

Amboseli National Park fulfilled my imagination before departure. I saw a white bird on the grassy foot at the foot of the snowy mountain. When this monster carrying a friend slowly passed by a lonely acacia tree, I felt that it was a waste of time.

Under the reminder of my companion, I lifted the camera and slammed the shutter. From the telephoto lens, I can see more interesting and wonderful details: the elephant’s eyelashes are long, the skin has deep folds, the flexible nose sweeps across the grass, and the little one on it Then stand steadily and arrogant. 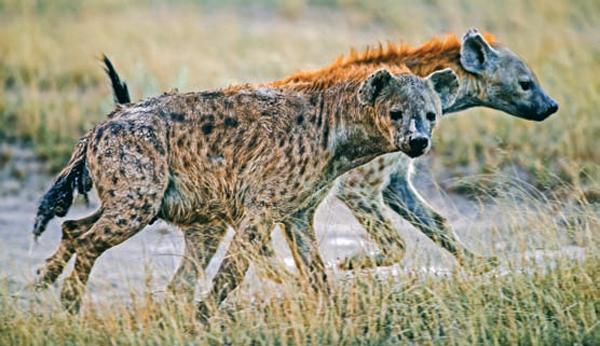 It is difficult to shoot animals on the grasslands of East Africa. It is not easy to say. In the hinterland of the grasslands, herbivorous ungulate mammals are everywhere, and they are not afraid of the vehicles they drive. If you take a few shots, you will have a surprise. But not all animals are very on the mirror, and some styles are really weird.

If it is on the mirror, Zebra will win the crown. Although the zebras are not tall, their head and neck mane and incomprehensible look, coupled with the fashionable “black and white striped shirt”, is like an international supermodel. On the green grass, a shot is a blockbuster.

There is also a giraffe that is more lensy than a zebra. They are always full of long necks, big eyes, and can’t stop chewing on the delicious taste in their mouths. However, no matter how much they eat, once they find the camera, they will definitely face the camera without shyness and give the photographer a face.

There is a network buzzword that is used to describe the animals in the East African grasslands. It is more appropriate: “I found myself being photographed, the beautiful ones are laughing, the ugly are hiding.” Unfortunately, the ostrich is probably the latter.

It was found that there was a group of ostriches that were “meeting” in the circle. The driver slowed down and we slowly approached them. I lifted the camera in excitement, but the ostriches were timid, twisting their heads, aiming at our movements, and moving in a panic toward the distance.

We found that we stopped, they stopped, but they brushed their buttocks toward the lens. Some look at us with our heads, and some bury our heads to avoid our eyes, as if it can’t see us, we can’t see it.

If you want to take a good-looking photo, you need not only the cooperation of the animals, but also the light of the force.

Although the midday sun is bright, the glare of the light shook everything on the earth, and the color of the photos is always monotonous. At dusk, the sky was reconciled to a warm orange color, and everything on the prairie was plated with a thin layer of gold. The photo is beautiful, and my heart is beautiful.

A group of wild elephants lined up in front of our car, we met the setting sun and quietly watched them go home. The fulfilling day is over, and we are still trying to return to the camp with a tired body.

Give me a kiss
Before I came to Africa, I knew that Amboseli National Park had groups of elephants, zebras, antelopes, wildebeests, giraffes, and African buffaloes, but it was not easy to track lions and leopards. The driver and the guide did everything they could to take us through the corners of the park, but still couldn’t find the footprints of the cats, let alone the splendid leopards. 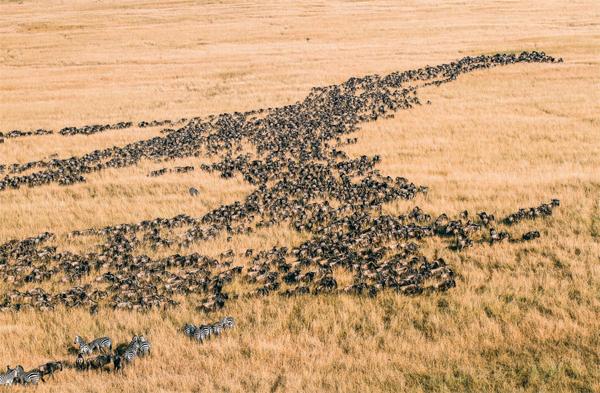 However, our windfall is a couple of hyenas. The female kennel is in the grass, and the bulging belly indicates that she wants to be a mother. The children’s father squats in the nearby waterhole, where there is a rotten hippo body. The hyena attempted to tear a piece of food, but was repeatedly retired by other hippos in the potential pool, only eyes and nostrils.

As a bystander of this dispute, I admire the hippo’s guardianship of the companions, and also anxious for the long-lost hyenas. What can be done? People are always smart, but they are not transparent.

I couldn’t see the elegance of the king of the grassland, sitting in the returning car, my mood was a bit low. They may be hiding in the bushes, peeping at us to leave in disappointment, but they will not come out with enthusiasm. I have a wish.

Fortunately, regret can make up. As a pillar industry in Kenya, the tourism industry has received great attention from the government. In order to provide visitors with a richer experience, to comfort those who have regrets in the safari tour, and to cultivate the concept of local conservation of animals, the Elephant Elephant Orphanage and Giraffe Center in downtown Nairobi are open to visitors, further Shorten the distance between people and animals.

As the name suggests, the Elephant Elephant Orphanage will take care of the elephants who have been taken away by the hunters and provide them with food and safe shelter. The elephants that grow up can survive independently, and the orphanages will release them back into nature. .

At about 10:30 in the morning, the two rows of elephants will be led by the breeder and run into the viewing field from the far hillside. Under the gaze of a circle of tourists, the elephants greedily sucked the bottle, and after the full stomach, they played in the mud pit.

The broadcaster broadcasts the life of the elephants. He heard a little elephant witnessing the death of his mother. Someone quietly wiped his eyes.

From a human point of view, I don’t know if the elephants are still suffering and sad, but in such a situation, I feel heartache from the heart. Human greed is insatiable, causing countless tragedies.

In contrast, the atmosphere in the giraffe center is much easier. In the feeding area, as long as you use the lips to lightly sandwich the food, there will be a shy giraffe coming to your lips to ask for food, and give you a wet kiss by the way. The tourists happily took photos of the giraffes, while the giraffes gave generous kisses and enjoyed themselves. I have been troubled by the giraffe eating too fast, my friend caught a good photo of kissing.

The staff smiled and said to me: “Catch a little bit, don’t let it be so easy to eat.” But every time its wet long tongue came out, I immediately slammed.

Leaving the Giraffe Center, my girl’s heart calmed down, but her thoughts were still flooding. When, in nature, can humans be so harmonious and intimate with wild animals?