Stepping out of the Blaak station in the heart of Rotterdam, the Netherlands, every breath of air sucking into the lungs seems to be full of design.

Architect Piet Blom designed the “square house” and “pencil house” in 1984, standing side by side, a few steps ahead, the city library with yellow pipes. Looking back at Blaak Station, it actually has a roof like a flying saucer and a pot lid. Turning around again, it is the “major horseshoe” that has occupied a lot of media in recent years – the Markthal arch market.

In 2014, the Markthal arch market, which was built by the famous architectural design firm MVRDV, was officially completed and became a new landmark in Rotterdam due to its unique, eye-catching appearance and huge grid glass curtain wall. But in Rotterdam, known as the “modern design capital”, every landmark can be a past tense at any time, replaced by a newer, more avant-garde building.

A variety of irregular, broken-frame buildings are filled with vitality for the contemporary Rotterdam. But the city came out of the war. 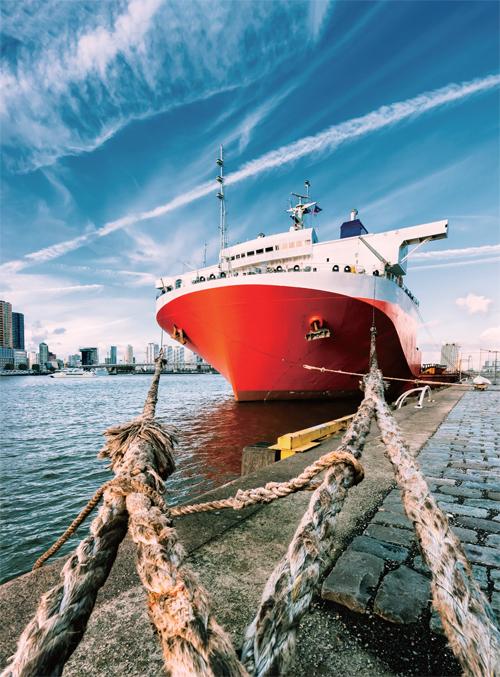 On the evening of May 14, 1940, 90 German bombers flew over the city of Rotterdam, dropping nearly a hundred tons of explosives and razing a city of about 2.6 square kilometers. Nearly a thousand people died and more than 80,000 people were left homeless. A few days later, the Dutch army announced its surrender. St. Lawrence Cathedral stands in the bombing area, watching the un-extinguished fire and the smoke of the land, accompanied by the city that was born in the 10th century, facing the lowest moment of the millennium.

After the end of World War II, Rotterdam stood up again and encouraged the architects at that time to make bold attempts to create today’s Rotterdam, a lively and design-filled city on both sides of the New Maas River.

However, why did the Germans in 1940 enter the Netherlands and choose to go straight to Rotterdam, the second largest city, as the primary target of seizure? This issue must return to Rotterdam’s history, geographical location, and how it is deeply embedded in the global trade network.

Dam on the Rotterdam
Seven centuries before the bombing, in the lower reaches of the Rotter River, a small river that was injected into the New Maas River, the villagers built a dam on the north bank of the Maas River in order to withstand flooding, and used the gate to gate the Rotterdam and the Maas River. Separated. The area is hence named Rotterdam (Rotterdam).

Rotterdam is strategically located more than 200 kilometers west of the busy Dover Strait. It is eastward to the two most important rivers in Europe, the Rhine and the Danube. In addition, the winter is not frozen and the silt is not silted. It is destined for Rotterdam. It will rise in the harbor.

In the 14th century, Rotterdam, which was first acquired by the city, opened a canal connected to the northern Dutch town of Delft and Leiden. The completion of the canal has promoted the shipping industry in Rotterdam, making it a cargo transshipment center between the Netherlands, England and Germany.

Since 1568, the Protestant Dutch have erupted for decades of the Dutch Revolutionary War (also known as the “Nederland Revolution”) in order to rebel against the then Catholic ruler, the Habsburg dynasty of Spain. Because of the war between the two sides, the Dutch lost two important sources of goods: spices from East India and salt from the Iberian Peninsula. However, at that time, the Netherlands accumulated enough wealth because of the export of squid, so at this historical moment, the Dutch have grown their ambitions and determined to compete with Ocean.

In 1595, a fleet departed from Amsterdam and followed the Portuguese route, bypassing the Cape of Good Hope and arriving in East India. After the fleet brought back the first batch of goods from the Eastern world, thousands of Dutchmen sailed from ports such as Amsterdam and Rotterdam, and even caused excessive competition. In just 5 years, the fleet sent from the Netherlands reached 50 batches, more than the combined number of Portugal and Spain.

In 1602, in order to prevent the profit from falling due to excessive competition between caravans, the Dutch government led the establishment of the world’s first joint stock company, known as the Dutch East India Company (VOC). Although Rotterdam was noticed at the time and was not as good as the capital, Amsterdam, Rotterdam entered the golden age with the growth of the trade of the Dutch East India Company and the expansion of overseas colonization.

In the 18th century, the rise of the British fleet squeezed the Dutch trade space. In 1795-1815, Rotterdam was completely occupied by foreign occupation because of the French occupation. In 1872, the new waterway leading to the North Sea was completed; in 1877, a railway that crossed the Maas River to the southern towns opened, and Rotterdam ushered in the second flourishing period.

When the First World War broke out, the Netherlands chose to remain neutral, but Rotterdam became the intelligence base for the UK and Germany because of its strategic location. More than 20 years later, the Second World War broke out and the Netherlands once again chose neutrality. However, this time, Rotterdam failed to evade the war, but was forced to face the nearly 100 tons of explosives falling from the sky. For Rotterdam that day, hell fell from the sky. 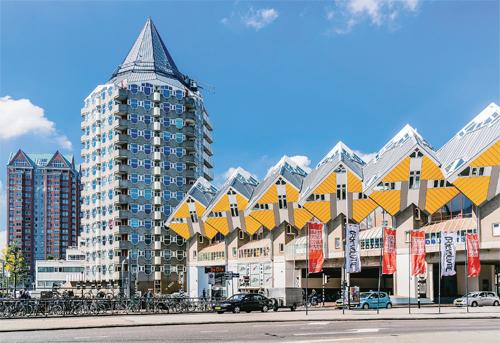 Rebirth of Rotterdam
After about 20 years of ruthless bombing, Rotterdam, a rising and falling, reborn. In 1961, the port of Rotterdam surpassed New York Harbor for the first time and became the world’s largest port. In the 1980s, it became the largest container port in the world.

Today’s Port of Rotterdam, with a port area of ​​more than 100 square kilometers, a coastline of about 40 kilometers and a maximum water depth of 23 meters, allows giant cargo ships and over 300,000 tons of supertankers to be safely parked.

According to earlier data, bulk transit cargo accounts for 85% of the total cargo volume in Rotterdam, of which 70% is crude oil and petroleum products, and the rest are ore, coal, grain and fertilizer. In terms of collecting and dispatching lines, roads, railways, rivers, air and sea transport are all magical. It is said that 30% of the international road transport in the EU is borne by the Netherlands.

The Port of Rotterdam, which has the same port and river port functions as the Port of Hamburg, now has more than 400 routes to the rest of the world. More than 30,000 ships and 200,000 river boats are docked every year. Behind this achievement, Germany, which is geographically and culturally close to the Netherlands, has also contributed a lot.

On the one hand, the Rhine River originating in Switzerland is the longest river in Germany, and Rotterdam, as the main sea passage of the Rhine, has taken on many large freight orders in Germany; on the other hand, Germany built the Rhine-Danube Canal in 1985. The Rhine River is connected to the Danube River in Romania as far as Romania, which greatly shortens the voyage between the North Sea and the Black Sea, communicates with the two major water system countries, and also increases the supply of goods to the Port of Rotterdam.

The economic value of the Port of Rotterdam makes it not only the most important port in Europe, but also an important partner of China’s “One Belt, One Road”. In fact, China has a very close relationship with the Port of Rotterdam. The Netherlands has been China’s second largest trading partner in the EU for many years, second only to Germany. More than half of the first stops from China to Europe for deep water cargo flights are in Rotterdam. Since 2004, China has been the largest source of containers for unloading in Rotterdam.

Today, the Port of Rotterdam is also a world-famous “fast harbor”. In the face of huge cargo throughput, it can be said to never “press the ship”; even if it faces a 10,000-ton vessel, it can make it from entering to leaving the port. The time is no more than a week. Why can the Port of Rotterdam be “fast”? How can I handle an average of 40,000 containers per day? The answer is nothing more than two words – technology. 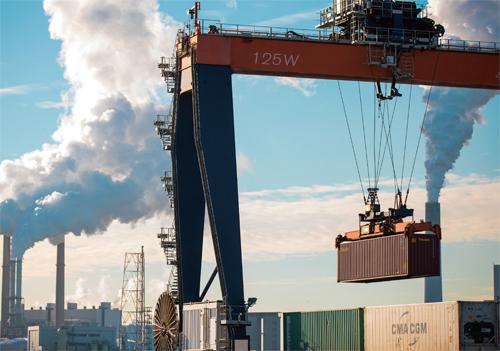 High-tech wharf built in China
At present, there are a total of seven port areas in the Port of Rotterdam. The outermost area is the Maasvlakte port area with a prominent coastline, the Europoort port area is slightly inside, the Botlek port area is inward, and the other four port areas.

The Euromax terminal in the first phase of the Maasvlakte port area has been in operation since 2010 and became the world’s largest automated container terminal at the time. In fact, the history of container shipments is only 50 years, but so far about 75% of the shipments are shipped through containers.

Known for its high technology, Euromax Terminal has 58 “automatic track cranes” that operate 24 hours a day through remote control. Although the container was removed from the ship, it still required the use of a very small number of manpower-operated “semi-automatic shore crane equipment”, but the terminal was already an “unmanned terminal”.

Linked to the shore and the yard, it is a Taiwanese “unmanned truck” – an automatic guided transport vehicle called “AGV trolley”. Hundreds of AGV cars transport containers from the shore to the designated yard through preset procedures, without manual operation and without colliding with each other. After the AGV car arrives at the yard, the container is lifted to the preset location by the automated rail crane.

The unmanned terminal not only solves the work obstacles caused by bad weather, but also can realize 24-hour operation without a lot of manpower. The Euromax Unmanned Terminal is a major milestone in the history of global port transportation, and a large part of this award is shared with China. Because the 76 automation equipment set up by the terminal, or even the background program for scheduling, came from Shanghai Zhenhua Heavy Industry.

From the Middle Ages, the Port of Rotterdam experienced the golden age of the 17th century together with the Netherlands. It also survived the rain that the Germans cast during World War II, and eventually became a high-tech giant port. However, just as the landmark buildings in Rotterdam can be surpassed and replaced at any time, in the 21st century, the complex, constantly refurbished technology and fierce competition of the global economic and trade network have made the Port of Rotterdam dare not stop.

How long does the Port of Rotterdam retain the title of “the largest port in Europe”? Will it be surpassed by its strong competitors – the Port of Antwerp in Belgium (13th in the world) and the Port of Hamburg in Germany (18th in the world)? No one can say these questions. But what is certain is that this city and port that emerged from the disaster will always have a place in the history of global trade and shipping.