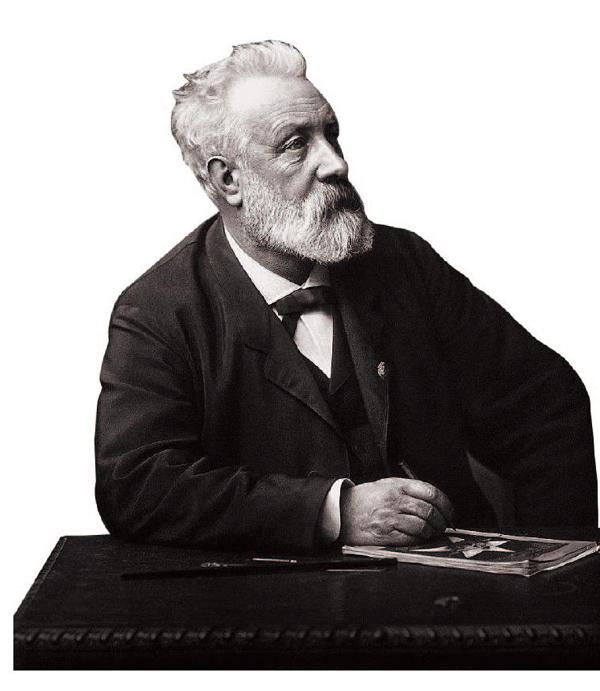 He claims to have no special interest in science, but in the past 50 years, he has written more than 100 science fiction works. He does not think that he is the inventor of deep-sea snorkeling, but his work “Twenty thousand miles under the sea”, the magnificent underwater scenery, the magical plot of the shackles, the sad and lonely characters, has lost countless readers.

Today, many of his fantasies, such as deep dive, flying, landing on the moon, helicopters, and traveling around the world, have been fulfilled.

His works have a variety of translations of 4,751, translated into more than 50 languages, more than the “king of the drama” Shakespeare, ranking second in the world. From the silent era, his novels were filmed into various types of movies. He is known as the “father of science fiction” and juxtaposed with the Englishman Wells.

In the same field, the two “fathers”, this is the only one on the title.

Unlike Wells, who is good at describing the Martians attacking the Earth or traveling on time machines, Verne’s works are more numerous, realistic and interesting.

In his youth, he was passionate about drama. He was a professor in Paris. He was the secretary of the theater. He was appreciated and directed by Dumas. Two people became lifelong friends, which greatly helped his later creation. His science fiction plots are suspenseful, the content is wonderful, the language is moving, and it is not unrelated to the early drama experience.

From the end of the 19th century to the beginning of the 20th century, the accumulation of knowledge in human society for thousands of years ushered in the growth of geometric progression. Electromagnetic technology has advanced by leaps and bounds, and the new industrial revolution is on the rise. His works came into being, and influenced his generations with his rich content, solid foundation, broad vision and reasonable forward-looking.

After many scientists and explorers became famous, they all admitted that they were inspired by him.

Submarine inventor Simon Lake called him “the general guide to his career” in his autobiography; Rear Admiral Bird said he was the leader after flying over the North Pole; hot air balloon and deep-sea explorer Picard, radio inventor Marconi It is agreed that he inspired himself. “Modern technology is just a process of putting his predictions into practice.” French scientist Ao Taisheng summed it up.

2
2 Wood Street, Amiens, France, is the former residence of Verne, and the end of his life.

He was not born here, but he went to bed in the bedroom on the second floor.

On March 24, 1905, at 8 o’clock in the morning, a sea-star-like and sophisticated brain stopped thinking.

On the wall, he had a white photo of his hair, his body was lying on his back, his pillow was very high, and his eyes were slightly closed.

From this moment on, the moon or the depths of the universe, the bird’s-eye view on the hot air balloon, the sneak of “Nodius”, and the voyage of “Saint Michel” have become a thing of the past.

The manner in which he left peacefully reminded me of Captain Nemo who died in the novel Mystery Island. The captain was surrounded by a small group of fugitives he had rescued: engineer Smith, journalist Spilett, sailor Pencroft, black Naboo, juvenile Herbert, and the incarcerated Ayrton.

Around Verne, there are also a group of people: wives, priests, doctors, friends, housekeepers, servants and photographers who took this photo. They gather in the shadows outside the picture, like the dark matter that hangs between the galaxies, which is hard to detect, and works through the omnipresent gravitational force—occlusion, shielding, disguise, and distortion.

His wife, Honorina, is the widow of a sailor who lives alone with two children who are dead. They fell in love and married in 1857, and they had a son after marriage.

Onorina doesn’t necessarily know her husband’s work, but gives Verne a stable and safe life. Of course, the popularity of the work has also brought a steady income to the family, so they can have such a comfortable home. The house has three floors, with a large sun room on the ground floor, rich green plants, and a model of the Nordicus made in the 1970s. In the middle of the curved building is a cylindrical red brick tower, which stands high above the roof. This is his private observatory, where he often communicates with the stars.

In contrast, the room he wrote was very small, almost the smallest of the buildings. For writers with deep imagination and far-reachingness, the house is just a place for essays. The space is too big and there are too many things. Instead, it interferes with thoughts and blocks time and space, which easily affects the simplicity and cleanliness of the works.

His only child, Michel, did not inherit his imagination, but only continued the Julesian family’s lineage and surname. As a father, Verne seems to have exhausted all the imaginations about the future of that era, leaving no room for his son to play freely. The only child had to go to the Indian ship on the voyage to make an unsuccessful sailor, and there were many embarrassments between the father and the son. Throughout his life, the old Verne had to complain while paying for his son’s poor financial situation.

It was this son who was obscured by his father’s halo and did not make a difference in the market public opinion. In 1907, two years after Jules Verne was buried, he spent a lot of money to give his grave a unique distinction. statue. After two world wars, after a hundred years of wind and rain, until this morning, this statue is still in its original appearance, completely presented in front of my eyes.

Verna’s funeral was extremely grand. The Amiens helped the old and brought the young, and the city came out, giving him unparalleled mourning.

They followed the carriage carrying the coffin, walked to the cemetery of Madeleine in the outer suburbs, and sent the great genius back to the dust.

It is a very inaccessible road, and the bus has to stop at nearly 20 stations. Although public transportation has a detour factor, even a straight distance is not easy for hikers. From his home, through the ancient streets, across the Somme, and along a shadow of a poplar tree for a long time.

The Amiens were grateful to Jules Verne, who glorified the ancient city that was desolate because of the bustling Paris. His high vision, excellent storytelling skills, and extraordinary foresight have given people in the 19th century who are still living in low-lying areas, pointing out the magnificent scenery in the distance.

Although he himself has a pessimistic attitude towards the development of science and technology.

His work is so fascinating that he can’t put it down when he touches me. The most wonderful “Marine Trilogy” has been read and written dozens of times. The familiarity is like his own experience.

At the age of 16, I was caught off guard and destined to jump into my own Verne era.

I can’t remember who first loaned me a “Mysterious Island”, but time is not wrong – in the late summer of 1980, the college entrance examination has ended, waiting for news at home. Excitement, suspicion, worry, ambiguity, constant conviction and repeated overthrowing, the imagination of an uncertain future, the sadness of the sorrow, will not leave until the end, in short, the ambiguity of the five flavors.

That is a hurdle from the youth into the youth.

Suddenly there was no holiday homework, and the original bossy father became polite. No one is urging me to work and rest, I seem to want to do anything, but I am not happy. Ming knows that something is quietly passing away, trying to grasp it, and not being able to start, the heart is unable to tell the frustration, there is a sense of laziness and powerlessness.

The power of “Mysterious Island” relieves the anxiety.

From reading Jules’s book in 1980 to visiting Verne’s tomb for 37 years.

For 37 years, it is walking, and it is time to walk into the moon and find the super cannonball from Earth to the Moon.

3
The morning cemetery is quiet, I am the only Chinese.

Just like the images I have seen before, the sculpture in front of the tomb is the one who struggles to break the tombstone, break free from death, and climb outside. The right hand stretched out into the sky, the left arm supported the ground, and just struck out half of the body from the corpse, looking at the sky, angry and helpless.

This is an intriguing sculpture.

From the late 1970s to the early 1980s, it was an unprecedented period of prosperity for Chinese science fiction.

It seems that who said it, it is the spring of science.

It is also the spring of science fiction.

The Central People’s Broadcasting Station even broadcasted the novel “Mysterious Island” in a long-running way. Every day at noon, after the news and newspapers were summed up, a savvy sound was heard all over the country.

“We planted this wheat,” Herbert replied.

“Just see if it can sprout!” the sailor shouted.

“It will sprout,” Cyrus Harding said.

In those days, people who had no chance to travel abroad, through the ubiquitous electric wave, know the depths of the ocean at the same time, there is a mysterious island that is independent of the world, a group of people who have lost contact with the old and new continents, and a cynical The traveler, the name is Captain Nemo.

People care about their destiny and wait for the following, many people have given birth to the desire to explore the distant world.

Take back your thoughts.

In front of the master’s tomb, there are benches.

I have to leave, go back and see the outstretched hand.

Jules Verne, thank you for foreseeing an era.