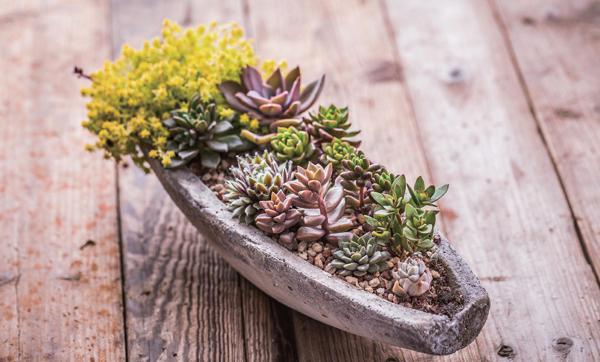 The most common succulent plant variety purchase price of less than 1 yuan, coupled with some different styles of flower pots, artistic creation, can make a platter rise to tens of dollars

The furry bear boy, the chihuahua in the shape of a lotus flower, the crystal clear jade, the Mingyue, the California sunset, the Queen of Salsa… these poetic names are from the succulent kingdom.

Once upon a time, a pot of mini cute succulents, turned out to be an essential decoration on the urban white-collar desktop. However, behind the cute appearance, succulents still have unknown bitterness.

Buy flowers at a high price?
A succulent plant refers to a plant that is thick and juicy and has a large amount of water. According to statistics, there are more than 1,000 succulents in the world, distributed in tropical and temperate regions. Because of its drought tolerance, simple care, and easy reproduction, succulents are also known as “lazy plants.”

Interestingly, every year when the weather is dry, the temperature difference between day and night increases, and the leaves of succulents change subtly, especially in areas with plenty of light.

Low temperature promotes the synthesis of anthocyanidins in plants. Compared with green pigments, anthocyanins can absorb ultraviolet rays from sunlight, provide heat to plants, and play a role in keeping warm and keeping warm. The proportion of anthocyanidins has increased, and succulents have turned red. The light and temperature difference make the original green oily plants bright and translucent, showing a dazzling color. This huge difference in growth and change is highly ornamental, and it also makes the lovers of succulent plants quite fulfilling.

In fact, as early as 2000, farmers in Fujian and other places began to introduce succulents from South Korea and Japan for greenhouse cultivation. However, the succulents of the time were not unusual compared to other ornamental plants, and the recognition was not high, only popular in the niche flower circle.

The succulents are truly well known and were around 2013. Most people in the industry attribute the sudden outbreak of succulents to the hot effect of Korean drama. The succulent succulent plants appeared frequently in the Korean drama and quickly became the heart of the urban white-collar workers.

People can buy succulents on major e-commerce platforms without leaving their homes. The increase in demand has brought about soaring prices, coupled with merchant hype and marketing packaging, the price of succulents has been rising. Some imported hybrids are even more expensive, and the Korean version of the peach egg, Helena and other expensive goods, sold a few single leaves to tens of yuan, and even the phenomenon of “one leaf is hard to find”.

In 2015, the price of succulents reached its peak. From the purchase and cultivation to the succulent plant that takes only half a year to get out of the shed, it will have a profit of 20% to 30%, which is much higher than many other flowers.

The crazy market and high profits have produced a strange and chaotic scene, and all kinds of wonderful operations have been staged in the succulent market around the world. For example, using PS technology to paint succulent plants, the back of the ground is shoddy, with grass seeds instead of succulent seeds shipped.

The most famous case is that the photo is a blue flycatcher. After the customer buys the seeds, they take care of them, but in the end they only harvest a pot of green grass. 90% of the merchants selling fake seeds are from the “hometown of fake seedlings” and Suqian in northern Jiangsu. It is the hometown of Jingdong’s founder Liu Qiangdong.

Similarly, Cangzhou on the southeast coast is known as the “hometown of flowers and fruits”. In order to pursue the succulent plants, the local farmers are quick to leave the shed, like the cabbage, applying large water and large fertilizer, and operating extensively. The plants produced here are often huge, dark in color, and very poor in quality, and are sold to “smugglers” all over the country at a lower price.

As for the traits of succulents, it is hard to beat the savvy vendors. Vendors spray colorful lacquer on the leaves of succulents, or inject syrup into the leaves, destroy the chloroplasts of succulent plants, and create a “bamboo” (natural “blossom” is a variation of succulents. The illusion of being rare due to the scarcity of quantity is also known as the “medicine brocade” in the industry.

But in either case, damage to plants is fatal and irreversible. Unsuspecting consumers, seeing such a beautiful succulent plant, can hardly resist the temptation, and purchase the diseased plants at a high price, resulting in 100% death of the “heart”.

Price return to rational
The succulent market has been hot until 2016.

In the second half of 2016, it can be said that it is the turning point of the succulent market. After the National Day that year, the original autumn season should usher in the peak season of sales, but the price of succulents has been falling. In particular, the common varieties such as Sedum, the price drop is the most obvious, compared with the peak period, the average decline is close to 70%.

Of course, this does not mean that the succulent market will never recover. The appearance of succulent plants and the characteristics of easy maintenance, cater to the young consumer groups, coupled with the huge loss in summer (novices are difficult to pass the summer), most consumers will replenish after the fall into the autumn, so the market space is still huge.

On the other hand, it is unrealistic for succulents to return to the era of profiteering. “Light weight, miscellaneous and not specialized, mainly road goods” is a common phenomenon in the industry. Now the decline in profits and the increase in costs have forced practitioners to change their minds of making quick money and operate more finely.

Practitioners need to continuously introduce new varieties and eliminate low-yield varieties. Succulents like Sedum have a faster breeding rate and the market risk is rather large. At present, most of the mainstream succulent plants on the market come from abroad, and there are few innovations in their own varieties in China. The entire succulent plant industry is in full swing, and it is necessary to achieve breakthroughs and innovations in all aspects of variety, cultivation soil and planting technology.

At this point, neighboring Korea has provided experience. Korean succulents are exquisitely small and beautiful, with a variety of colors and varieties. There are 100 succulent plant production farms in Korea, mainly in the form of family farms, with a production area of ​​3,000 square meters to 30,000 square meters. The farm uses a multi-span greenhouse and a solar greenhouse. The maritime climate makes the succulents here colorful and compact.

The flower was purchased at a high price, and the result was 100% death in exchange for “heart”.

Continue to “sprout”
The transition from a single primary industry to a high-yield, high value-added tertiary industry is the only way for the succulent plant industry to continue to grow in the future.

Compared with simple sales, the succulent plant landscaping program service will have greater profits. For example, indoor micro-landscapes, wedding decorations, outdoor greening and landscaping are all directions that can be explored.

Succulent experts can even carry out training services. Although the succulent planting threshold is not high, it is not easy to raise it. As a gathering place of the network, various forums and post-tabs on the theme of succulents have sprung up. Whether it is “succulent plant”, “succulent plant trading” and other Baidu Post Bar, or know the technical stickers developed by the succulent plant enthusiasts, there are high clicks, which proves that there is a huge market space that can be tapped behind.

Increasing the added value of products, exploring more application scenarios of succulents, and realizing the extension of the industrial chain are another way of thinking about the sustainable development of the succulent industry. The most common varieties of white peony, jade butterfly and rainbow jade, the purchase price of less than 1 yuan, coupled with some different styles of flower pots, to create art, can make a platter rise to tens of dollars. This is because of the mental work of the creator.

Establishing industry standards and market norms is another big voice in the industry. A pot of succulent plants of the same specifications, merchants offer ranging from 200 yuan to 2,000 yuan. The chaos in the succulent market cannot be ignored. Whether it is production or sales, it is necessary to establish a system.

No matter how mutated or crossed, succulents are always an ornamental plant. Its value lies in the beauty of people’s lives, and artificial hype does not change its attributes.