Life is tenacious and more fragile. The fact is that the vast majority of the planets in the universe are barren land, and the home of mankind, the earth, will one day become unsuitable for any life. Of course, this day is still far away from now, probably after billions of years, but it is not allowed to be tomorrow, the day after tomorrow, any time.

Here are the six most likely ways scientists think the end of life on Earth.

Although the light and heat of the sun gave birth to life on earth, it also threatened life on earth. High-energy particles from the sun are bombarding the earth all the time, they are the killers of life, because DNA can’t resist their bombardment. Fortunately, the earth is protected by a “shield” called a magnetosphere. The magnetic airsphere deflects most of these high-energy particles and detours; a few are not deflected and are blocked by the Earth’s atmosphere. In this way, we can survive on the earth. 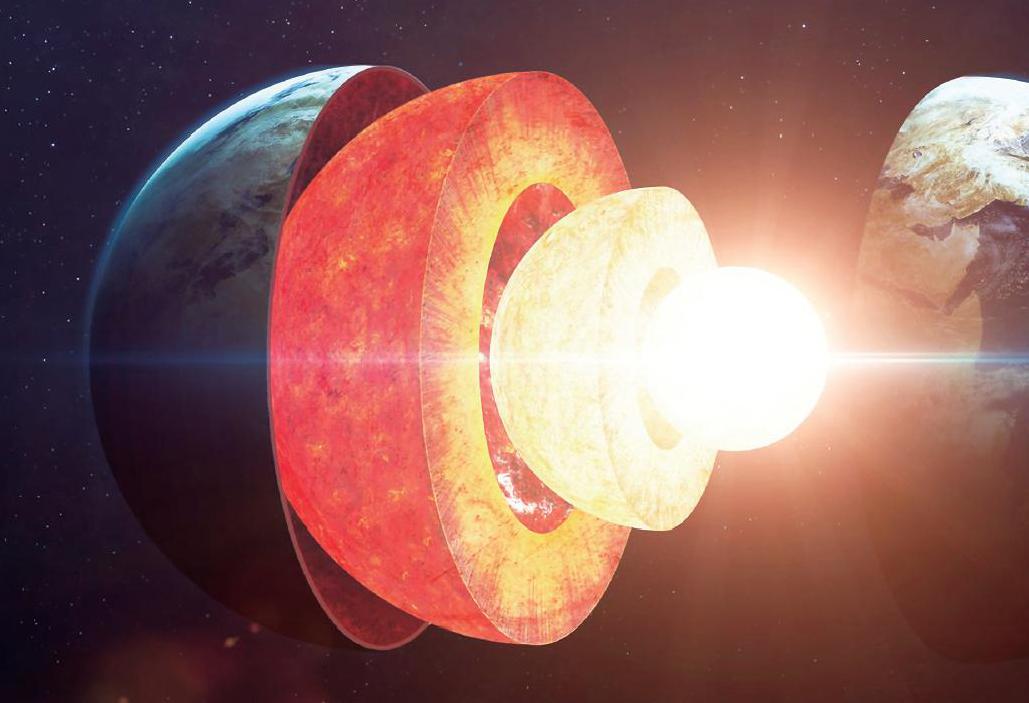 How did the “shield” of the earth come from? This problem has not been fully understood until now. It is now widely accepted that the geomagnetic field is related to the liquid outer core of the Earth.

We know that the ground core is divided into two layers inside and outside. The inner core is solid iron and the outer layer is molten iron. At the high temperature of 6000K and the atmospheric pressure of 3.6 million atmospheres, the electrons in the atom will escape a lot, the electrons will be negatively charged, and the atoms that lose electrons will become positive ions. If the positive and negative charges are not separated (this is called plasma), then the whole is still electrically neutral.

From the above point of view, the generation of the geomagnetic field is inseparable from two conditions: one is the rotation of the earth; the other is the existence of the liquid outer core. According to the law of conservation of angular momentum, the earth’s rotation will not stop. However, the existence time of the liquid nucleus is limited, because the outer core of the earth can maintain its liquid state, relying on the heat generated by the decay of radioactive elements in the solid core, and the radioactive elements always decay a little less. When the core is cooled, we will lose the magnetosphere. A lot of high-energy particles in the solar wind will shoot directly at us, and our atmosphere will be slowly blown into space by the solar wind.

This scene has already been staged in the history of Mars. Mars used to have abundant water resources and a thick atmosphere, but the cooling of the Earth’s core billions of years ago has caused today’s Mars to have almost no atmosphere and no life.

2, the sun will swell and die

This is the background of the story in the movie “The Wandering Earth.”

The sun is a star, and the stars glow by nuclear fusion, but when the fuel of fusion is always useful, when that moment comes, the life of the sun comes to an end.

The sun has been burning for 4.6 billion years by turning hydrogen into a cockroach. It is currently in its prime, and it will continue to burn for more than 5 billion years. However, in the years to come, it will burn more and more. After more than 5 billion years, the radiation is almost twice as high as it is now. Under such intense radiation, the surface temperature will exceed 300 degrees Celsius, and the liquid water in the oceans and lakes has already vaporized. Earth life can only hide in a deep underground to survive.

Later, the sun will expand into a red giant, swallowing Mercury and Venus, and possibly engulfing the Earth. Earth life will be incinerated. The Earth itself may also be pushed away from the orbit by the expanding sun, wandering in space.

3. The earth is pushed to

Speaking of stray planets – those planets that were kicked out of their “solar system” during the formation process – according to recent simulations, in fact, in the Milky Way, stray planets may be much more than stars, and the ratio of the two can be Up to 100,000 to 1. One of them may also drift into our solar system. Once such an uninvited guest breaks in, the structure of the entire solar system will have to undergo a major adjustment. After the whole system has stabilized, it is hard to say whether the earth can remain on the track that was originally suitable for life. If the stray planet is large enough to be close enough to the Earth, it might even kick us out of the solar system or let the Earth collide with nearby planets such as Venus or Mercury.

Or the stray planets that break into the solar system not only disrupt the Earth’s orbit, but directly hit the Earth. This kind of bad thing is not without precedent. About a billion years ago, a smaller planet hit the Earth, and the heat generated by the impact melted the Earth. The spattered debris gathered in space to form the moon.

A new collision will also melt the entire planet. Although the earth will eventually cool down after the impact, it is hard to say whether it is still suitable for life at that time.

In addition to stray planets, asteroids from space are also quite destructive. The once overlord on earth, the dinosaurs, suffered from the catastrophe after they bombarded the earth, even though the mammal we belong to was exactly that impact. Survivors of the event and unexpected beneficiaries.

Although a devastating blow to all life on Earth requires a large number of asteroids – the probability of such a thing is small, but the possibility exists. The Earth was hit by a large number of asteroids for hundreds of millions of years after its formation. The impact of the storm, the ocean has been boiled for decades. At that time, life evolution had just started, and they all belonged to single-celled organisms, and only the most heat-resistant ones survived. If you switch to today’s multicellular creatures, there is almost no possibility of survival in that environment.

The earth is swallowed up by the black hole is one of the favorite subjects of the Hollywood Doomsday film. This is not unreasonable, because this story is both mysterious and thrilling. The name of the black hole gives people an infinite imagination. Although we don’t know much about black holes, we know that their density is so great that even the racing champion in the universe, the light, can’t escape their clutches. And scientists believe that in the dark universe, there are wandering black holes everywhere. It is not difficult to imagine that they may accidentally break into our solar system. If it is a tiny black hole, it is not dangerous. For example, after a proton-sized black hole hits the earth, it will drill a slender hole in the earth like a worm, and then grow away. Because its gravity is not enough to swallow the entire planet. But if a black hole of quality over the moon is a bit of a hassle. Since the light can’t escape, the earth is not to mention. If the earth is too close to the black hole, even if it is not swallowed by the black hole, the strong gravity of the black hole will cause natural disasters such as large-scale earthquakes and volcanic eruptions. The earth will become a hell from the paradise of life.

5, Earth life may be

Gamma ray bursts are one of the most spectacular natural phenomena in the universe. Most of them are caused by the collapse of a massive star when it dies. A gamma-ray burst of just a few minutes or even seconds releases more energy than the sun releases. These high-energy gamma rays have the potential to destroy the Earth’s ozone layer and may also directly trigger global warming. After the ozone layer is destroyed, the ultraviolet rays in the sunlight can reach the ground directly, which is a great threat to life on land. In fact, a gamma-ray burst 440 million years ago may be responsible for the first mass extinction of life on Earth. However, fortunately, the source of the gamma-ray burst is very far away from us. We don’t have to worry too much about the life of the earth being erased overnight.

6. The universe may collapse in the “big tear”

This is not only the end of the earth, but also the end of the entire universe. The reason is: a mysterious force called “dark energy” is pushing the universe to expand faster and faster. If the current acceleration is maintained, about 22 billion years later, all the matter in the universe, even the atom, will be disintegrated. Only the radiation is left in the world. By that time, the universe was chaotic, and we and the planet we lived in could not find a shadow.