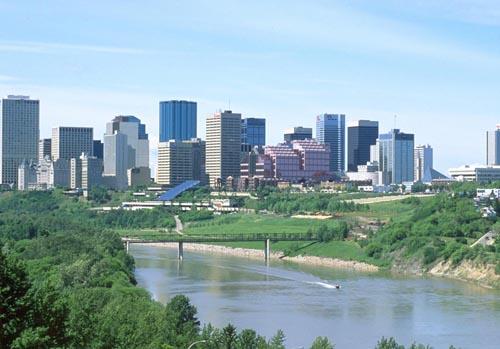 Edmonton is the largest city in northern Canada and the northern part of the Americas. It was built in the late 18th century and was developed in 1891 by the Canadian Pacific Railway. The whole city was built in the mountains of the Rocky Mountains, and it lies in the embrace of nature. Therefore, the builders seem to have a special preference for green, and they continue to plant trees and grass to beautify their homes. Now they are covered with green. The base mountain blends into one, like an emerald inlaid in the mountains, which is particularly bright and dazzling. Many people call it a glorious “beauty jade” in the Rocky Mountains.

On the second day of arriving in Edmonton, in order to quickly grasp the beauty of this “Jade”, I took a tour of the city’s scenery under the leadership of my friends.

Although Edmonton is a big city in Canada, there are not many high-rise buildings as big cities. More than a dozen high-rise buildings are concentrated in the city center, or the curved north Saskatchewan river bank and Albo Around the University of Tasmania, there are only a few high-rise apartments or hotels in other parts of the city. They stand in a multi-story house and villa cluster surrounded by green grass and flowers. It is so eye-catching as a standout.

Edmonton, which is approaching the summer, is full of lush greenery and is like a garden. In addition to the buildings in the urban area, there are large lawns in front of the house, and bare dirt can be seen. In some wooded places, squirrels and hares jumping and running can be seen everywhere, and no one is playing around, playing, and having a leisurely look.

There are many parks in downtown Edmonton, which are free to visitors. One of the most beautiful parks in the city center is called the Duck Lake. Entering the park, the eyes are full of green, the pool is green and clear, the breeze is over, and the layers are smashed. There are many trees growing around the lake. There are many kinds of trees near the lake. The branches and leaves are drooping, like a shy girl, bending over and gently kissing the lake. A group of wild ducks on the lake, free to swim, fluffy teal, gray, closely behind the parents, this situation, let me think of the “ugly duckling” depicted in Andersen’s fairy tale “. 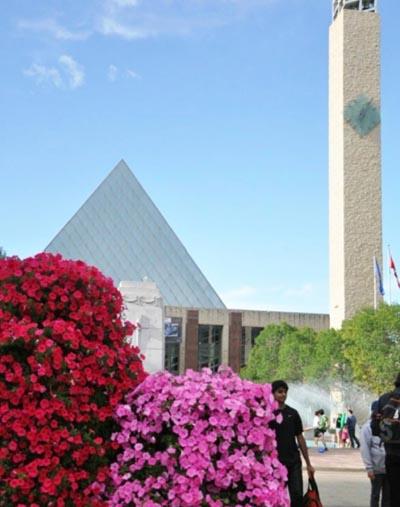 When I was visiting the city, I found that there were a lot of sports venues in Edmonton. “How can there be so many gymnasiums in a city with a population of less than one million?” After listening to my questions, my friend told me that Edmonton’s Naturally, the people living here are very advocating sports. There are five high-quality large stadiums in the city. The largest is the Federal Stadium, which was built in 1978 for the Commonwealth Games, and can accommodate 600 million spectators. Moreover, the greening in the stadium is very good. The special lawn is like a generous green carpet. It always exudes a touch of grassy fragrance. The indoor sports venues such as the ice hockey hall, skating hall and basketball hall are also planted with a variety of green plants. Always give people a vibrant visual impact. Therefore, many large-scale sports events in the world and in Canada have been held here, such as the World University Games, the World Skating Championships, the World Athletics Championships; Canada’s national taming horses and ropes, and other national sports competitions, as well as important National football matches and more. The introduction of my friend reminded me suddenly that China’s former women’s world foil champion, Ju Jujie, settled in Edmonton, the number one fencer and head coach of the city’s fencing club. “Yes, Qi Jujie settled in Edmonton in 1989. After nearly 20 years of unremitting efforts, the members of the Edmonton Fencing Club have jumped from the 40 people she just came to the current 300. Many people, and trained a large number of fencing players for Edmonton and even Canada, she is now a celebrity here!”

Near the evening, my friend took me to the Saskatchewan River passing through the city, looking up, the long river bank, completely covered with green, like a streamer made of emerald, decorated with beautiful The city, as it is 16 kilometers long, is known as Canada’s largest urban green belt. The banks of the river are full of leisurely people, strolling, cycling, picnicking… everyone enjoys the gift of nature in their own way. After nightfall, I stood by the river and overlooked the city of Edmonton. The lights were shining, like the stars and bright eyes, adding a beautiful landscape to the city. And the reflection in the neon of the river, radiant, I can not help but give birth to a dreamlike feeling…