“They are beautiful, but they are not vases. Their respective stories are much harder than many science fiction heroines.”

Women must be independent, strong enough, and free to choose everything that suits them. True equality means no need to mention equality. ”

In 2011, Feng Yunxi was 24 years old. In Tripoli, the capital of Libya, she and many international reporters witnessed the fall of the Qaddafi regime. At that time, Feng Yunyi and 38 reporters including BBC, CNN, and Wall Street Journal were trapped in a hotel room with no water, no electricity, no food. In 5 days and 4 nights, she could not stop thinking about “Tomorrow. The worst result was whether it was sacrificed as a hostage or was shot dead by anti-government forces.

In the end, they returned safely. Feng Yunyi also found that what people fear most is the imagination itself. But the thinking triggered by this incident is not over yet.

Feng Yunxi said that the question she was asked most in the Middle East was that there is no man on your TV station. Why do you send a female reporter? “Although I know that he is complimenting my bravery, I can see that their mental model is relatively conservative, and that the main value of women is still a contribution to the family.”

Before this, Feng Yunyi also doubted the significance of his arrival here, and also knew that when the danger came, the male reporter might indeed run faster. However, after spending five years visiting several places where she was fighting, she found that people’s alertness against female reporters was indeed much lower. She said: “I find that news often only cares about facts and does not record human emotions. I am very concerned about the way wars look when they present individual souls. I don’t even care about politics and situational judgments, but I want others to pass living people and stories. Through each person’s life choices, not numbers, to connect with the Middle East.”

After returning from the battlefield, Feng Yunyi received many praises, but often felt that she was “not qualified”. She used to attribute her achievements to external factors and thought that she was just lucky. Later, she gradually discovered that many girls had the same idea and she gradually understood. Women should be more confident and believe that they are unique and indispensable. This is why she and three other guests have appeared in this forum on the theme of “female power”.

In 2014, an avalanche occurred in Mount Everest, and 17 Sherpa and climbers were killed. For a time, most of the mountaineering teams chose to retreat. At that time, Wang Jing was doing the “7+2” project (climbing the highest peaks of the seven continents and walking to the north and south poles). Everest was her eighth stop. The danger was in front of her, but Wang Jing decided to follow the spirit of extreme sports. “Once I made the decision, I had to pay 100% of the effort.” She regrouped in Kathmandu and climbed Mount Everest.

This work usually takes a long time to prepare – the data says that it takes 45 days to 2 months to climb Everest scientifically, and it requires a large team, but Wang Jing and 5 Sherpa, Together with a chef and a kitchen, I decided to complete the challenge in two weeks. Wang Jing said that in the case of conventional mountaineering, there will be people who will build roads first, but they will complete the “Alpine-style” challenge (a mountaineering activity that does not depend on others, completely or mainly rely on the climber’s own strength to climb various mountain peaks). Do everything yourself.

After all the imaginable and unspeakable difficulties, Wang Jing and his party reached the summit at 6:30 in the evening, which set the latest time for humans to summit Mount Everest. Then they were safe at 12 o’clock in the middle of the night. Withdrew to the 7950-meter camp.

It is difficult for people who don’t understand mountaineering to understand the difficulties. In fact, the fall of Mount Everest at night is very dangerous. All 8,000-meter climbs have a mortality rate, and 90% of them are in the process of going downhill. Wang Jing said that during the whole process, their thoughts were highly concentrated, they believed in themselves, and they believed in teammates. This finally allowed them to complete this extreme operation together.

As a scientist, Tang Limei’s daily work is a scientific test.

On September 7, 2013, Tang Limei completed the 72nd dive mission with the “Jilong” and became the first female scientist in China to sneak into the ocean by “Jianlong”.

Tang Limei introduced the dive: she sneaked into the Caiwei Sea Mountain in the western Pacific, responsible for the investigation of geological resources. The cabin of the “Dragon” has a diameter of 2.1 meters and contains various experimental supplies. It also squeezes three scientists. The day before the dive, according to the regulations, you can not drink water. The next morning, according to regulations, they ate biscuits and other foods. Tang Limei said that the process of dive is very beautiful. There are luminous creatures in 300-1600 meters. “Like the stars, like the fireworks in the night sky.” Open the searchlight on the sea floor and see the sediments of the white pelicans. It seems to be in outer space. . They collected samples all the way, dive and float for a total of 10 hours. At the deepest, they went to the sea 2774 meters. 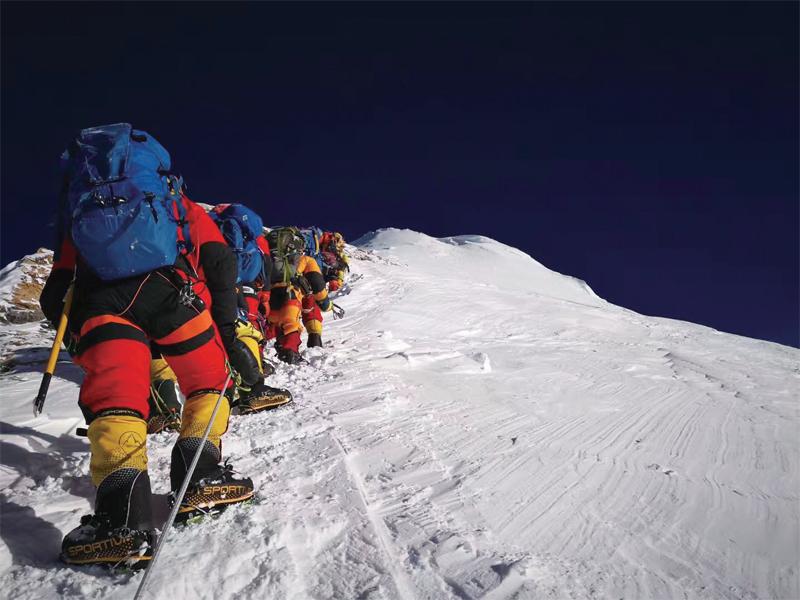 As the first female scientific research worker in China who has both deep ocean diving and polar scientific expeditions, Tang Limei also told her the most emotional moment in Antarctica: when China held the groundbreaking ceremony for the fifth research station in Antarctica, The snow blows a lot, and the wind is so big that they can’t open their eyes, but when she blinks and sees that the five-star red flag of Zhongshan Station is still bright, there is still a strong national pride.

Somebody asked an important, cute and charming question at the scene. Without considering any restrictions, where is the most extreme place you want to go to?

I want to talk about the story of Qian Haiying here. Qian Haiying is 45 years old. She was born in Beijing and grew up in the courtyard. She and Wang Jing have been friends for many years, but their careers have been busy and have not been seen for a long time. People know Qian Haiying because she is good at outdoor sports, but few people know that her contact with outdoor sports started very late. She started climbing in 2000, started skiing in 2001, and started ice climbing and rock climbing in 2002. Rowing dragon boat, kayaking began in 2003, diving began in 2005, and skydiving began in 2013.

Two years ago, in the documentary “Inward Gravity”, the 43-year-old Qian Haiying became the protagonist of the film for the first time. She jumped from a height of more than 4,000 meters. After landing, she took off her helmet and goggles, dragged the parachute to a stroller, and stooped to greet a four-month-old baby.

For this female topic, I want to use Qian Haiying’s words as the end. In the post-meeting interview, Qian Haiying said that she felt that true equality means no need to mention equality. Women are to be independent, to be strong enough, to be free to choose everything that suits them. “Why do men want to open the door for me?” Qian Haiying asked me, “I have to open the door for others, which has nothing to do with gender.”