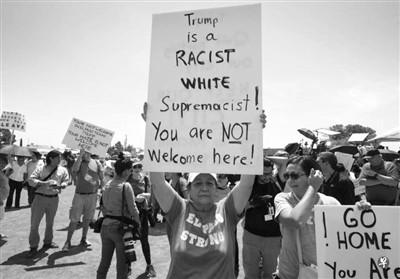 “Trump wants to play the role of a comforter, but…” CNN reported on the 8th that El Paso, Texas, and Dayton, Ohio, had consecutive serious shootings last weekend. A total of 31 people were killed and dozens were injured. US President Trump visited the two cities on the 7th to visit the people injured in the shooting. But the protesters accused him of publishing anti-immigration and racially discriminatory statements and ineffective control.

On the same day, Trump and his wife Melaniya went to a hospital in El Paso to visit the injured in the 3rd shooting incident and talked with the hospital staff and thanked them. After staying in the hospital for more than one hour, the two went to the local emergency command center. In a park not far from the hospital, thousands of people gathered to hold protests. The demonstrators held high slogans such as “Go home, don’t welcome you here!” “Stop hatred” and called for the cessation of racist speech and control of guns. Protesters accused the Trump administration of not controlling the guns and believed that gun control should now be strengthened. Curry, an expert at the University of Texas at El Paso, said that “the government should control offensive weapons.” It is the proliferation of offensive weapons that has led to frequent vicious shootings in the United States in recent years.

Many of El Paso’s people completely ignored the visit of the President of the United States. Democrat Rep. Escobar said that he refused to meet with Trump and denounced Trump’s previous “racism and hateful speeches and actions” that made El Paso and the United States suffer. “People are afraid to become Hispanic (the victims of the guns are mostly Hispanic),” Congressman Hernandez said before Trump’s visit. She said that most people feel “uneasy and angry” about the president’s visit. Even many people believe that Trump’s visit is “salting salt” on the wounds of the Latin community.

Trump and Melania also visited the hospital in Dayton, Ohio, to comfort the injured and the families of the injured. Local Democratic Congressman Brown and Mayor Hui Li said that Trump consoled the wounded to do the right thing. However, the two also expressed concern about Trump’s previous remarks, pointing out that he had pressured Trump to tighten gun control.

Similarly, at least 200 local protesters gathered outside the hospital. They shouted slogans, accusing Trump’s inciting remarks of political and ethnic tensions in the United States and demanding action to control guns. The demonstrators also lifted the “Trump Baby” balloon and raised the slogan “Do something,” “Save our city” and so on. Despite this, after the end of the visit, Trump celebrated the “success” of the day’s visit through Twitter. Trump sent a tweet that the condolences were warm and wonderful, full of enthusiasm and love. CNN said it was not surprising that Trump was left out in two cities where the shootings took place. The residents of these two cities are still in sorrow. Many people think that the culprit is the loose gun law of the United States. There is no strict gun control law in the United States because the Republican Party “has been in trouble.”

In 1994, Democratic President Bill Clinton passed a bill restricting the proliferation and use of American guns, banned the use of 19 types of offensive weapons. But the bill is only valid for 10 years. After 10 years, the ban was invalidated. The Republican President George W. Bush not only did not extend the validity period, but instead passed the protection law for the sale of firearms. In the past 10 years, Democratic President Barack Obama has tried to restore the Clinton ban, but was eventually rejected by the Republican-controlled House of Representatives.

At present, the voice of the US gun control is getting stronger and stronger. The public demanded that the Republican-controlled Senate vote on the bill passed by the Democratic-led House of Representatives. The bill requires background checks on all gun buyers, including those who buy guns on the Internet or at gun shows. However, many experts are not optimistic that the bill can be passed, because the gun law has become the competition point of the two major parties.

“The gun has become a part of American life.” The Swiss “Daily Herald” pointed out that the research shows that the number of guns owned by the United States is estimated to exceed 393 million, accounting for 46% of the global total. In the United States, there are 120.5 guns per 100 people. US President Trump admits that “there may be more work to do in gun control.” The “Red Flag” gun law he signed in 2017 restricted people with psychological problems from accessing firearms. However, he has not mentioned any new measures to restrict the purchase or use of firearms.

“New Zealand can be a role model for the United States!” The German “Süddeutsche Zeitung” suggested that the United States may wish to learn from New Zealand. In March 2019, 50 people were killed in a shooting case in Christchurch, New Zealand. New Zealand later passed a new version of the gun control law, prohibiting people from holding weapons such as semi-automatic rifles. At the end of this year, citizens were also asked to hand over weapons they had legally obtained. ▲

Like the riots caused by the US gun control issue, Trump’s immigration policy has also brought about big fluctuations. “The United States has ever carried out the largest enforcement action in a state in a state!” The US Yahoo website reported on the 8th that the US Immigration and Customs Enforcement (ICE) searched seven locations in six cities in Mississippi in an operation on the 7th. 680 illegal immigrants were arrested.

The search was conducted by ICE in collaboration with the US District Attorney’s Office in the Southern District of Mississippi. ICE said in a statement that the focus of the action is on those who are trying to do illegal work in the United States, as well as employers who knowingly hired them. In the operation, they arrested about 680 illegal immigrants and reviewed the business records of the relevant processing plants.

Reuters said Peco Foods, based in Alabama, USA, confirmed in a statement that ICE had searched the company’s processing plant in Mississippi and said it had “close cooperation” with law enforcement officials. Industry organization National Chicken Meat Commission spokesman Shupel said that meat processing companies will hire legal workers as much as possible.

The ICE statement also stated that the arrested immigrants did not have valid residency documents, mostly from Latin America, but did not mention specific nationality in the statement. However, the Mexican Consulate stated that their staff had set out to travel to the area to assist Mexican citizens who might be involved.