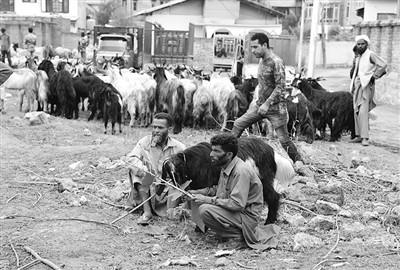 On August 12th, residents of the Indian-controlled Kashmir region ushered in a major festival, the Muslim Gulben Festival. To this end, the Indian government slightly relaxed the tight control of the region last weekend, and there was a long-lost popularity in the local market. But is the situation in Kashmir really eased? On the 10th, a number of foreign media exposed the largest demonstrations since the military blockade on the 9th in Kashmir. In response, the Indian authorities rushed to blame, saying that the so-called “10,000-person parade” was nothing. Public opinion generally believes that the return of life is only due to the arrival of the Eid al-Adha festival, and does not mean that the public’s anger against the Modi government is eliminated.

According to the “India Times” reported on the 11th, as of the 10th, many cities in the Jammu-Kashmir region relaxed restrictions on people’s travel. Some public institutions such as schools and hospitals have resumed operations. The Slyaga government in the capital has also advanced wages of 3 billion Indian rupees (about 298 million yuan) in advance for public officials. Local residents who suppressed many days also flocked to the streets on the 10th to purchase a large amount of life and holiday supplies. There was a long-lost busy scene in the market. The business of noodle shops, meat restaurants and clothing stores was booming, and Srinagar was once caught in traffic congestion. However, such a scenario only lasted for one day. The Hindustan Times reported on the 11th that the Indian military had strengthened its control over Srinagar later that day. People were told to go home quickly and all the shops were closed again. The local residents said, “This is a Don’t dare to shop for the Gulben Festival.”

According to Agence France-Presse reported on the 11th, the connection between the Srinagar people and the outside world is still limited, and the two external telephone lines open to the public in the local government building are the only channels. According to the report, there are long queues in front of these two phones every day. Each user only has two minutes of talk time, and they have to accept the search before the call. It is precisely because of the information occlusion that recent rumors about India-controlled Kashmir have been rumored, and many foreign media, including the British “Daily Mail”, claimed that a large-scale mass demonstration took place in the area last Friday, and demonstrators and military police occurred. Intense conflict. On the 10th, the Indian Ministry of the Interior rushed to blame, saying that there were only sporadic protests during the control period, and the media reported that it was “purely fabricated.”

At the same time, a large-scale network public opinion war is also being staged vigorously. In the past few days, the social media in India and Pakistan have frequently appeared on the hot topic label “The 370th article of the Constitution has been abolished” and “Kashmir is in the same place”. The netizens of the two countries have debated this. The Wikipedia page on “Kashmir” has also become a battleground for online public opinion, and some key words have been frequently tampered with, so that administrators have to turn off guest editing rights. Pakistan’s “Dawn” said that Pakistan’s resistance to India is rising, and many industry representatives have recently voiced their voices to support the country’s suspension of trade with India.