There is such a familiar moment: you turn on the computer in the morning, the waiting time is up to 60 seconds, or even longer, the system prompts you to select “cleanable items” to improve the running speed. You did it and deleted unnecessary boot items, residual history, cached pictures, and chased soap operas. Ten minutes later, as the computer hard drive is completely new, you seem to be reborn.

After 3 hours, your computer screen is filled with open chat windows, fresh soap operas, a lot of advertising emails and subscription journals. You hesitate, can’t choose which one to delete, what to keep, you feel impatient, and finally tiredly choose “one-button shutdown” to end the daily routine anxiety.

Intermittent “minimalism” and permanent “fetish” hand in hand, occupying a private background under our personal silhouette. The extremely limited living space and thinking space require us to make regular choices in order to achieve the most reasonable private allocation of the economy. 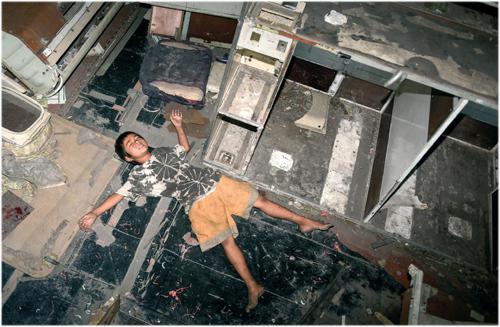 From “disposal” to history
The term “disposal” as the name of garbage has existed for hundreds of thousands of years before human beings entered the history of writing. However, physiological excrement is not a choice as garbage. In this respect, human beings are no different from beasts; while “artificial waste” carries civilization and historical significance.

For example, the “Dead Horse Bay” on the southern tip of Brooklyn, New York, although it has the humble identity of open-air landfills, is now known as the old treasures. A large number of “Taobao people” come here to look for discarded glass bottles. And pottery, brought home to the wooden cabinets in the collection of antiques.

With the intrinsic power of garbage, people can reconnect with the past history in the moment of disconnection. After all, the physical things that are touchable and visible to the eye are more convincing than the words written in the history books of the big heads.

The inner strength of garbage is given by people. The value of the object itself has been refined over time, and it has already exceeded the “materiality” that can be replaced by chemical formulas. Its dilapidated, ruined and bleak eclipse adds to the sense of history, story and uniqueness of the object.

For Benjamin’s fans, these old abandoned objects have a unique “aura” of art than the imitation of old objects. “If we name the association that converges around a perceptual object in the involuntary memory as a halo, then similar in the practical object is to let the skilled fingers leave traces of experience.”

We can understand the halo as a sense of realism and uniqueness. Those who regained their belongings and collected and appreciated them as art objects also saw this characteristic of garbage. In historical time, items that originally had only use value and practical functions were attached to the complex identity of historical participants and witnesses, and perhaps also symbolized the average level of manual or mechanical production of that era, the stand outside the stage of the official history. A glimpse of the box, waiting for the discovery and capture of future generations.

In the inexhaustible flow of time, garbage as a functional death of the use of goods, brought garbage as a new life bridge between people and self, and history. It is the “garbage picker” that historicalizes the object and also self-historizes it.

Self-recalling “innovation”
We will be self-historizing the process, not just a few “collectives” to pick up the garbage, in order to evoke the “crazy” behavior of the inner memory of the past. Most people practice self-shaping by “screening-discarding” items.

Similar to the daily physiological discharge, due to the limited physical and mental capacity of the individual, we are often controlled by a “clean” demand: we feel the need to eliminate the “self-residue” in time. By taking a part of the past self from the current part of the self, it is a good new state of the future self.

The need for “cleanliness” illustrates from the side that the relationship between the self and the object is the desire and desire, the extraction and waiting for extraction. If my relationship with things is based on the usefulness of things, once the things I use are broken, or I don’t need them anymore, the things are downgraded to rubbish, and the connection between me and it breaks down – I am eager Things, objects, discards, and even finally picking up things from the garbage piles have completed my “thoughts, actions, rethinking, and re-actions”, thereby renewing myself and achieving the goal of reinventing ourselves.

In 2014, tens of thousands of ET Alien game cassettes produced by Atari in the 1980s were excavated in New Mexico, USA. The incident confirmed the “Atari Landfill Game Cassette”, a city legend that has been circulating for more than 20 years. At one time, among the 70s and 80s gamers, there was a cross-century nostalgic carnival.

The game cassette that was originally concealed as a game company’s slow-moving scandal has now become a historical monument that old players are competing for. We have long hoped that the cassette game machine will return to the market. We may not expect to return to the life scene of the 80s, but we need to use historical objects to build our own imagination of the historical scene.

Through a broken cassette, recalling the memories of today’s middle-aged people, began to look for more physical evidence, determine the time and place of the game at the time, and finally reconstruct a real world of memories. But the memories can’t be completely true, and the objects are just a series of “drugs” that are buried in the depths of consciousness. This nostalgic carnival is not so much nostalgic as it is “innovation”. It is enough to bring together personal memories and imaginations into a generation of people’s eagerly looking back on childhood, and this retrospective picture can still be experienced in that era. The public, showing a new world.

Similar to the “Republic of China” in previous years, the 1980s has become another “Utopia” imagination in the sense of the whole people. There is a utopian imagination on the opposite end of the rumbling and rubbish.

Not only is our personal historical writing necessary to be screened and abandoned, but the nation-state must also reshape the image by erasing history. As the garbage piled up into mountains and stinks, revealing the ugliness of human nature, and adding to the suffering of those who are reminded by the scavengers, the “ruins” have become an extreme landscape.

If we think that the items around us are stable and durable, so that we can open our eyes and recognize ourselves from familiar objects, then the existence of ruins seems to be ridiculing human self-deception and arrogance. We can accept three or four trash cans in a three-bedroom, one-bedroom room, but we can’t imagine living in the ruins of other towns.

Two utopia landscapes
The most interesting paradox is that although we can’t stand living in the garbage, we would rather be with the garbage than living in a space without garbage. This is the two Utopia landscapes shown in the movie “Top Player” and “Blade Runner 2049”.

The first half of “Blade Runner 2049” mostly occurred in the villa of the villain’s replica company. This futuristic building symbolizes a cold order. Everything has its own functions and self-use. The use of each space is one-dimensional and flat. Objects have only functional features and must not cause copying. Lenovo and memories. He never doubted his identity during system testing, work reporting, and accepting tasks. But in the second half of the movie, in order to find another illegitimate child of the copying person, K entered the industrial ruins. In the dilapidated factory, the K that shuttled through the waste was evoked childhood memories, and he began to doubt his identity.

The climax of the film was unfolding in the ruins of Las Vegas. The building returned to the style of mimicking the architecture of Athens and ancient Rome. The scene layout is full of memories and memories of human civilization. The title and music replaced the single electronic background music in the first half. K found a historical witness, unveiled the child’s gender mystery, and broke K’s illusion of his identity.

In “Top Player”, the protagonist lives in a slum made up of human waste, and he immerses himself in the virtual game world to escape reality.

Although the audience will be confused about the 3D real-world technology depicted in the movie, the future landscape depicted in The Number One Player is foreseeable. At least as modern people think, although the gap between the rich and the poor is even more disparate, and the ruins formed by garbage accumulation are more shocking, it is acceptable. Because the status quo is getting worse and worse, our expectations of “stagnation” are implemented in action, and it becomes a recollection and creation of the past glory. The “Top Player” shows a fascination with the pop culture of the 1980s. world.

In contrast, few people are willing to believe that the scene in “Blade Runner 2049” is the future of mankind. Regardless of the fictitious setting of the film that distinguishes human beings from copying people, the futuristic landscape appears as “empty”. In the absence of space, the absence of garbage is equivalent to the lack of history, the object is cancelled “halo”, unified is about usability, the story and meaning behind it is no longer, people can not think of personal history, can not understand what It is the soul.

When we are unfamiliar with the civilization of our own body and are finally completely separated from it, the loneliness of the ultimate isolation state is chilling. The real ruins are the spirit of nothing, not the excess of garbage.

Two extremes
The relationship between excess and emptiness is actually more complicated. When we face the inner space that appears in excess of the appearance, we must be vigilant.

“Junk Space” is the architectural concept proposed by Rem Koolhaas. It replicates individual shapes and components to form spatial continuity, closure and expandability, and eats empty space like desert. Then create a “filled” sense of desert. Due to its expanding nature, and each of its components is identical, it is difficult for people to distinguish boundaries, and an “infinite sense” that relies on replication and lateral proliferation is achieved.

In architecture, the convenience and spectacular effect of “garbage space” is its benefits, but it is also reminiscent of various utopian practices and fantasies: Nazi Germany’s “eugenics” and genocide, Zamiyejin’s The identity number in “” is even a pure object to the depth of desire; more realistic is human fear of cancer, nuclear nuclear weapons, fear of people and statistics.

For this reason, between the daily clearance and acquisition, between the fascination of “minimalism” and the obsession with “fetish”, we must always choose between “excess” and “empty”. Balance, as to which extremes the balance point is closer to, we will listen to the needs of the individual’s inner heart and construct my own “real world” in appropriate vigilance.