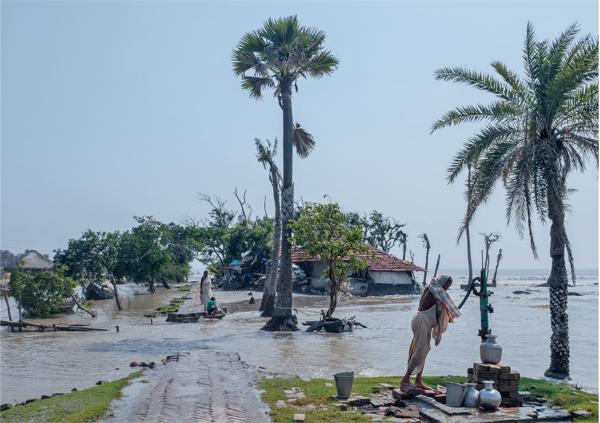 The Sagar Island on the Hugley River is located on the south side of the island of Goromarjo, and the tides surround parts of the Sagar Island. 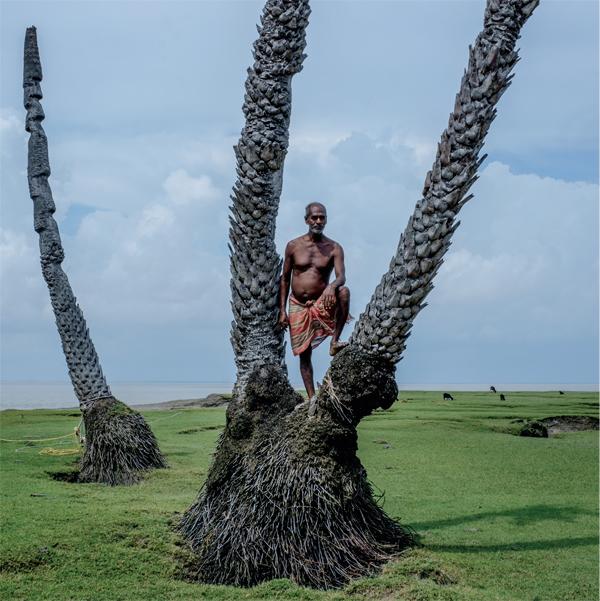 India’s Goromarjo Island is located on the western edge of the Sundarbans mangroves. Tree felling and rising sea levels have taken away the mangroves that protect the land, and it is now continuing to be attacked. Nitejo Gopal lost his home.

When the body of a friend who had died for a long time floated near the door of Blu Hadar, she knew that her house could not be saved.

For several weeks, the embankments of the East Tang Mali Village, in the Khulna area of ​​southwestern Bangladesh, have been threatened by the flooding of the Busu River. Initially, a violent storm destroyed the concrete on the outer side of the levee, and then, at the end of 2017, the river began to erode its permeable earth wall. The locals used sandbags to reinforce the embankment, but this also played a few days. When the river finally passed over the cemetery opposite the Hadar home garden, rushing out the bones inside and polluting the pond where the villagers drank water, her home was filled with brown muddy water.

“I can’t protect my house anymore,” she said. “We are as helpless as a group of children.”

Hadar is a well-dressed widow. About 50 years old, she foresees what will happen in the morning. She watched the nearby Sundarbans, a large mangrove forest adjoining the side of the village, fading, and the trees looked less and less lively. She also noticed how the flood of rivers exerted its power in the recession of the woods. Hadar insists that the only thing that is surprising is that the civil defense work in the village has been going on for so long. “The trees have protected us, and we have done very badly for them,” she said. “Now we have to bear the consequences.”

In Bangladesh and neighboring West Bengal, there are thousands of villages like East Tang Mali – they are losing their natural protective barriers in the face of growing climate change. On those flat lands, criss-crossing rivers with more water due to the injection of glacial meltwater. Hurricanes frequently visit the Bay of Bengal and sometimes kill thousands of people. Floods are everywhere.

Bangladesh is about the size of Iowa, but has a population of 160 million. Some farmers in the country describe their country as a god’s mischief: the land there is extremely fertile, but it always faces the danger of being washed away. A horrific flood in 1998 drowned about 70% of the country’s land.

However, local coastal residents believe they have the same weapons they can rely on, and that is Sundarbans, the world’s largest mangrove forest. This dense mangrove swamp that resists flooding is like a green protective wall that stretches over 10,000 square kilometers on the border between India and Bangladesh. It can dispel the storm surge and make the most powerful hurricane weak. For the villagers, they can also get a lot of honey from the mangroves and fish in the water. “Sundarbans is our mother,” said Joey De Sadar, secretary of the Holinogor Fishermen’s Association in Bangladesh. “She protects us, feeds us and provides us with a livelihood.”

After years of man-made and natural destruction, the mangroves seem to have reached an affordable boundary. Illegal logging – mainly used to build houses for the population of the region to inflict – has made the periphery of the forest sparse. At the same time, the gradual infiltration of seawater caused the salinity of the water to rise, which is leading to many more valuable species that can withstand the storms, such as the sundries that make the name of the woods die. The increase in salinity is both for land and seawater: the dam on the upper Indian river reduces the amount of fresh water entering Sundarbans, while the sea level rise caused by climate change allows more salt water to be poured into the red forest.

“The salinity front is continuing to rise,” said Marsh Fecus Salekin, a professor at the School of Water and Flood Management at the University of Engineering and Technology in Bangladesh. “The new area will be salinized, and the slightly salted areas may not be in the future. It is a big problem. It is a big problem. According to the worst assumption, the sea level will rise by 1.8 meters in this century. Only Bangladesh will lose more than 2,000 square kilometers of mangroves in Sundarbans; even In the best case, you will also lose about 200 square kilometers. Salekin and other scientists worry that even so, it is disastrous for a country that is very poor and people depend on the life of the forest.

The land is disappearing. Without the roots of the mangroves intertwined, the land is increasingly eroded by the sea – and the upstream dam blocks river sediments, and the land cannot be replenished as in the past.

At the mouth of the Ganges River on the western edge of Sundarbans, the islands on the Hugley River in India show an increasingly serious loss of woods and land. At least three of the mangrove-covered islands of a century ago, Lochchehler, Supperbench and Bedford, have disappeared. Other islands are also rapidly eroding: since the mid-20th century, Sagar Island has shrunk by about 50 square kilometers, and the island’s population has grown dramatically with the influx of neighbors who lost their land nearby. Sager’s crop growth conditions have deteriorated severely, and local residents are currently relying on other places for seasonal work to support their livelihoods.

In some areas of Sundarbans, seawater is swallowing land at a rate of 180 meters per year. “People around Sundarbans will face significant losses,” said an associate professor at the Jadap University in Calcutta called Tuxin Gauch. “Everything is happening.” But even the reds of Kolkata and Dhaka disappeared. The city is a long way from the woods, and he adds that he will also find himself “very vulnerable to hurricanes and storm surges.”

In February 2018, part of the embankment that blocked the Chinol River in western Don Tang, Mali, collapsed for the third time in a year. The 16 houses were washed away in a disaster that was almost common to local residents. But in the next few months, with the disaster, the oldest and most sensible residents saw that this was not an ordinary crisis. Rice production in the dry season of 2018 has fallen sharply – usually less than half a metric ton per hectare, leading to higher food prices. In many fields, vegetables simply cannot grow on salted land.

“Because of the damage caused by the big water, sometimes it seems that only the carpenter has a job,” said a farmer named Bimall Sardar.