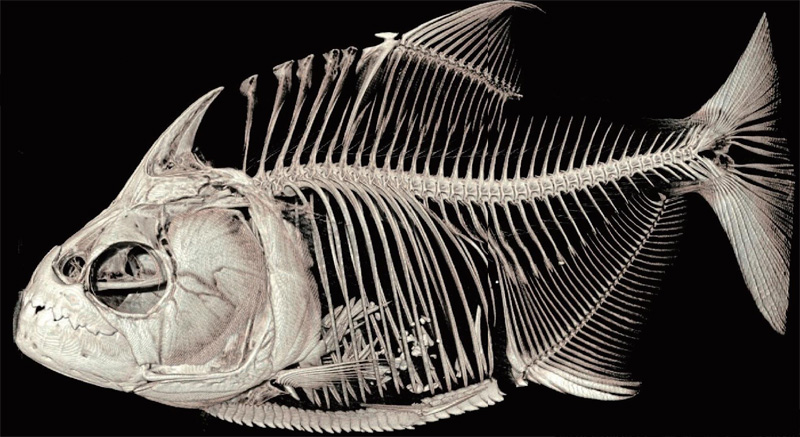 During the life of piranhas, the teeth on one side of their mouth will fall out and regenerate at the same time or multiple times.

In 1913, Theodore Roosevelt, the 26th President of the United States, visited Brazil. During his visit, he went on a hunting expedition in the Amazon rainforest. One day, he was standing on the banks of the Amazon River and witnessed a terrible scene-local fishermen surrounded a section of the river with nets and starved the piranhas in the river for a few days, after which they pushed a big cow into the water. Suddenly there was a commotion on the river with piranhas. In less than two minutes, the river water was dyed red, and the cow that was still alive just now was left with only a skeleton!
Piranhas are not only shown to the President of the United States, they are also eating like crazy. In rivers with piranhas, piranhas attack humans from time to time, and some people still die in the attack. The powerful attacking ability of piranhas is due to their sharp teeth. The piranha’s teeth are sharp, triangular and serrated, and it is also one of the strongest bony fishes. A piranha weighing about 1 kg has a bite force of 33 kg. The bite force of a general piranha is 9-50 times its body weight.
So why are piranha teeth so powerful?
Secret in the mouth

A few years ago, scientists discovered that half of the upper teeth in the mouths of some piranhas fell off at the same time, and then re-growth. But there was no evidence that piranhas changed their teeth in this strange way. Recently, scientists have adopted a new method. By scanning nearly a hundred specimens, digitizing bones and connective tissues, performing high-resolution three-dimensional inspections, and then dyeing fish tissues to observe how teeth develop and combine The genetic information of each species to understand the evolutionary relationship between them. It turns out that piranhas have a special tooth structure, and this structure allows them to replace a quarter of their mouth teeth at a time. This may be why they keep sharp teeth. 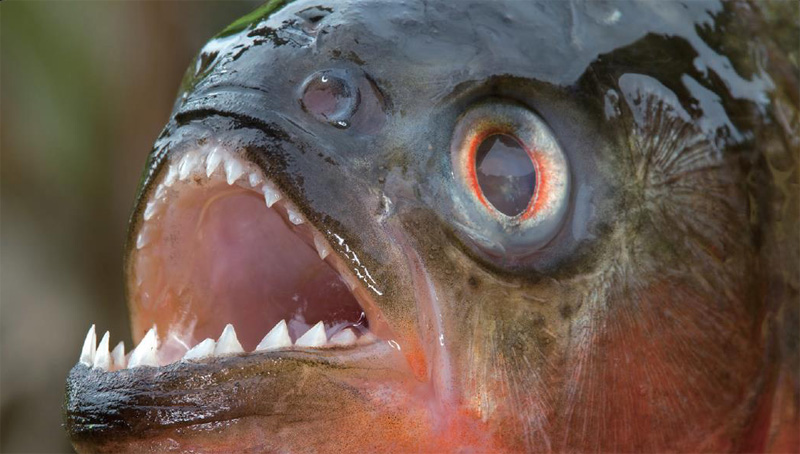 Piranhas are full of teeth and can easily bite the flesh of their prey.

Through advanced imaging technology, scientists have seen that although the piranha’s teeth are arranged individually in the mouth, they are tightly interlocked, so the upper and lower teeth in their mouths are connected in series. This kind of structure of teeth is conducive to the chewing of fish. When they chew food, the pressure will be distributed to the entire row of teeth instead of a single tooth. Not only will it not cause serious wear of a certain tooth, but it can also enhance its bite force. But the connected teeth mean that if you want to change teeth, you can only change a bunch of teeth at a time, not just one of them. Does this mean that piranhas will have missing teeth for a long time after a quarter of their teeth are lost? If so, their lethality is greatly reduced.
However, it is not. In fact, the piranha’s teeth have been developing under the old teeth. When the old teeth fall off, the new teeth are ready to go to work. Therefore, piranhas will not experience the embarrassment of being toothless for a long time. It is this way of changing teeth that makes the piranha’s teeth sharpened and firm, and can effectively bite the prey at all times.
Who is better than sharks?

So, can the interlocking teeth of a piranha really enhance its bite force? We can compare it with another animal that frequently changes teeth. It is a shark. Several rows of spare teeth will develop in the shark’s mouth at the same time. Once the front teeth are worn out, the back teeth will fill the gaps. Sharks change teeth to keep their teeth sharp, but unlike piranhas, there is a gap between one tooth and the other.
The bite force determines whether the animal is effective and powerful when biting its prey. We all know that the bite force depends on the muscle strength of the upper and lower jaws, but the firmness of the teeth will also have a certain impact on the animal’s bite. The shark’s teeth grow individually in the mouth, while the piranhas are each clasped together. In contrast, when the piranha bites, the force will be distributed to the entire row of teeth, which can reduce the pressure on individual teeth and make the teeth It’s more sturdy, which is the same as breaking one branch easily, but difficult to break ten branches. Scientists also seem to have found evidence by comparing the bite forces of sharks and piranhas. They calculated the maximum bite force of the great white shark through computer simulations-about 18216 Newtons. The bite force measurement of black piranhas shows that their bite force is about 320 Newtons. From the numerical comparison, the bite force of the great white shark is obviously much larger than that of the piranha, but if you consider the size difference between the great white shark and the piranha, then things are not that simple. The weight of the great white shark is about 3,200 kg, while the weight of the black piranha is about 10 kg. In comparison, the bite force of the great white shark is about 6 times its weight, and the bite force of the black piranha reaches 30 times its weight. ! And such a large bite force is inseparable from the piranha’s tight tooth structure.
Through the study of piranha teeth, scientists have learned the secret of the sharp teeth of piranhas and why they need to replace the teeth in a row. In research, scientists discovered that some fish that feed on aquatic plants have the same way of replacing teeth with piranhas. In comparison, piranhas, as carnivorous fish, wear more teeth when they bite their prey and eat. Changing teeth can keep their teeth sharp, but why do herbivorous fish need to change their teeth in this way? Next, they will conduct more in-depth research on the basis of piranha research. In addition, through this research, scientists have found a new way to study fish biology. Instead of dissecting fish, they can use imaging technology to understand fish digitally, which not only reduces the damage to fish. , It also has important help for future fish research.