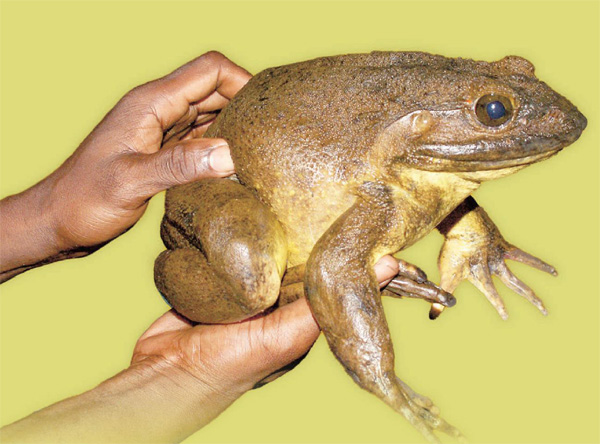 In the 1980s and 1990s, there was a frog jumping competition in the United States. Participants were selected from frogs from all over the world. In 1990, an American animal importer brought back 3 frogs that were very good at jumping from Africa and let them participate in a jumping competition. In the competition, these three frogs all defeated their opponents, and in the end one of them won the championship and became famous in the first battle.
How powerful are the frogs brought back by this animal importer? Allegedly, they can jump 3 meters high, they are simply high jump masters, and humans’ current world high jump record is 2.45 meters set by Cuban athlete Sotomayor. If they compete on the same arena, humans will lose. It. Of course, it is certainly not ordinary frogs that can jump so high. They are the largest frog in the world-the African giant frog.
A different giant frog world

As the largest frog in the world, the biggest feature of the African giant frog is its large size-an adult frog is about 50 cm long, up to 80 cm long, and weighs more than 3 kg. Their distribution area is very limited. They only live in the rainforests of southwestern Cameroon and Equatorial Guinea. Their favorite environment is beside waterfalls and rivers. Most of the skin of the African giant frog is green, only the abdomen is orange-yellow, and the skin surface has granular bumps. Such skin makes them integrate well with the surrounding environment, which can effectively prey and avoid predators.
Of course, apart from being big, the African giant frog has other special features. It has long been believed that African giant frogs feed on a specific plant in the jungle, and it is speculated that this is why they are only distributed in individual areas of Africa. But in fact, this is not entirely correct. Studies have shown that the tadpoles of the African giant frogs indeed eat plants, but after about 3 months of incubation, they grow into adult frogs. They no longer eat plants, but eat various insects, small crustaceans, and fish. , Small snakes and other amphibians, and sometimes prey on bats. Compared with ordinary frogs who only eat mosquitoes, this recipe is much more domineering.
In addition to the special recipe, the African giant frog has another outstanding feature, that is, they are all dumb. The African giant frog has no vocal cords and therefore cannot make a croaking sound. But at important moments, they can make a sound similar to whistling, which is an important tool for them to call friends. Although they are dumb, the African giant frogs have very keen eyesight and hearing, which provides great help for their survival.
The warmth of Hercules

Although local people have been preying on giant African frogs early on, and many African giant frogs have been sold all over the world to become human pets, humans don’t know much about them, especially their behavior in breeding and raising offspring. less. Recently, a research team conducted research on African giant frogs. Researchers found 19 puddles that appeared to be processed by the river in the rainforest. Evidence from cameras confirmed that these puddles were nests of African giant frogs, and they lay eggs in these puddles. Some of the puddles are very delicate. A circle of stones is piled around and a dike is built. In this way, the river can flow into the puddles from the gaps between the stones, so that the water in the puddles can keep flowing, but the water flow will not be prevented In a hurry. Even if the river suddenly rises after the heavy rain, a large amount of water will not suddenly rush into the puddle, which will destroy the puddle. 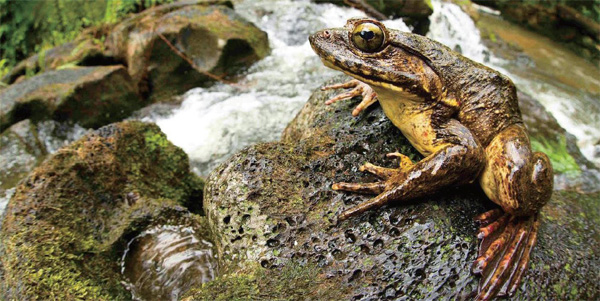 African giant frog likes to move by the river