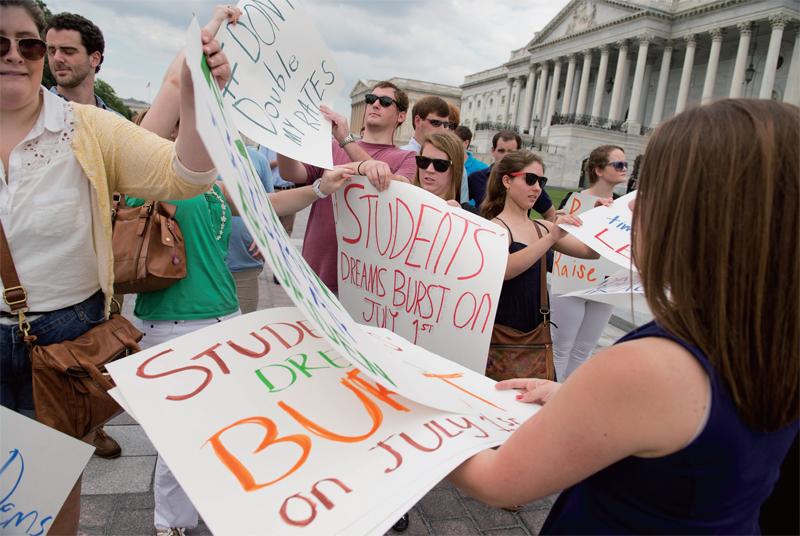 On June 28, 2013, American college students gathered near the Senate to protest against the doubling of student loan interest rates

Since Biden took office as president, whether to cancel student loans has become an important political issue.

What kind of experience is it like to pay tuition while reading? American college students may have a deep understanding of this.

Tiffany Ottigza, 19, is from New York and is currently a freshman at the State University of New York Polytechnic Institute. Long before the epidemic, Ottigza gave up his “dream school” Rochester Institute of Technology because of high tuition fees, and chose this public university after several considerations. Since she could not pay her tuition in full, she applied for a federal government grant and borrowed two forms of student loans, bringing the monthly repayment to the highest value she could afford-700 US dollars.

/ 43% of current students in the U.S. are also burdened with student loans. /

But every time the bill with the “Loan Repayment Reminder” arrived, Otigza couldn’t sleep through the night. Work to make money? The babysitter job that came to hand was soaked by the epidemic. Rely on parents? The only reliance-the mother barista was also forced to be laid off due to the completion of the epidemic.

Today, she has to raise tuition fees publicly on the Internet, and has raised about $2,000, which can repay student loans for two months. But for future bills, Ottigza said that he is still seeking funding from schools and society, and hopes that he can find opportunities to work and earn money as soon as possible.

How expensive are American universities?
There are not a few American college students who face the same problems as Ottigza. Moreover, due to the continuing impact of the epidemic, more and more students are unable to bear the pressure of university fees, and the number of people who choose to suspend and postpone enrollment is increasing.

The difference in tuition fees in and out of the state stems from the different taxes in each state in the United States, and universities will lower their fees because in-state students are taxpayers in the state. For the Polytechnic Institute of the State University of New York where Ottigza is located, because she is a resident of New York State, her tuition fee is already $9,910 a year less than that of students from other states. This is why she puts her goal in the application. One of the reasons for universities in New York State.

“I don’t think the university fees are completely correct,” Ottigza said. “The higher fees make it impossible for many students to read their dream school even if they are admitted. I have never traveled before, and very I want to go outside of New York State to broaden my horizons. But at the moment, everything is impossible.”

Today, when the U.S. economy has been hit by the epidemic, Robert Herman, the general manager of Credible (a private student loan company), predicts that university tuition fees may continue to increase, because the government’s funding for schools may be due to the overall The economic depression was further reduced. At the same time, because the income of individuals in the family has also been affected by the epidemic, more students may face financial difficulties.

Borrowing and reading have become normal
Many students have just entered university, but they have become “negatives”, and the loan will last for several years, ten years or even longer. According to statistics from the Educational Data Organization, 43% of current students in the United States are still burdened with student loans, and 65% of graduates are still paying back their student loans.

For Yu Guoren, “home loans” and “car loans” may be two big mountains, but in the United States, “student loans” have surpassed “car loans” and become the second largest consumer loan. The fiscal statement of the New York Federal Reserve for the third quarter of 2020 shows 1.55 trillion yuan, and the per capita debt of borrowers is 35,227 US dollars, or about 227,000 yuan.

Different from the “poor student subsidy” of domestic universities, the application of government grants and student loans for American students has become normal, rather than exclusive to “poor students.”

“It’s too common to borrow to study. Almost all of my two brothers have classmates around him.” said Mora Turcotte from California.

Turcott was born in a middle-class family, and his parents have good incomes. But to pursue undergraduate and graduate studies, she borrowed nearly $80,000 in student loans, and currently repays $870 per month, which even exceeds the rent she currently needs to live in Chicago.

Two years ago, she received the admission notice for the graduate program of journalism at Northwestern University. She was delighted at first, but when she saw tuition fees and loan interest twice higher than undergraduate, she said that she seemed to be slapped in the face.

“I’m only halfway through school, and the interest has already rolled over to nearly $1,000. It’s really scary. Although I didn’t need to repay the loan because I hadn’t graduated at the time, I was already in anxiety.”

Speaking of the impact of school loans on her, Turcotte said that although it is not a huge impact, some living expenses such as eating out with friends, shopping, traveling, etc., will make her feel guilty.

“I also hesitate for a long time when I want to order takeout. Although a meal is less than 20 dollars, what if I need this money someday?”

Samantha Martin, who has been hit harder by the epidemic, regrettably chose to drop out this year because she could not get a loan, and she has no plans to return to school in recent years. Prior to this, she studied for a master’s degree in space science at Florida Institute of Technology, and is about to graduate this year. But during the epidemic, she unfortunately lost her grandmother who was infected with the new crown. With great pain and the pressure of studying online, her grades declined, and she also lost the qualification to continue borrowing.

Dropping out of school not only means that the initial investment has been lost, but it also means that she needs to start repaying the loan she has borrowed. In the first year of school, Martin borrowed more than $30,000, but her only source of income is an online shop selling handmade jewelry that she opened before the epidemic. Life is still difficult.

“Recently, everyone has been strained due to the epidemic, and the store’s business is not as good as before. I plan to be a high school teacher, teaching biology, space earth science or physics, and hope to join a teacher preparation course.”

/ The federal government made more than $50 billion or more in its ten years of lending. /

When he enrolled in graduate school, Martin had infinite vision for the future, hoping to become a scientist in the field of space science research. But the epidemic has disrupted everything, and dropping out of school now seems more like a relief to her.

“I used to cry in tears almost every day because of school… After deciding to be a teacher, I feel that this is the first time I have ignited hope for the future in this period of time.”

Can the student loan be cancelled?
During the campaign, presidential candidate Joe Biden promised to waive a $10,000 student loan. Now that the 10,000 has not yet been delivered, the Senate Majority Leader Chuck Schumer and others believe that it needs to be raised to 50,000. Elizabeth Warren, a Democratic federal senator from Massachusetts, also pointed out that student loans have blocked the younger generation from buying a house, starting a business, and saving money for retirement, and hindered economic development.

“I will not cancel the $50,000 student loan.” Biden quickly rejected this proposal at a CNN questioning meeting in February, and for the 10,000 exemption, Biden has repeatedly proposed that it will be approved by Congress. Take action and do not accept Warren’s proposal to pass the presidential decree, so there is still a long way to go before the dust settles.

“I borrowed the money, so I should pay it back,” an American university professor posted on Facebook against the exemption plan. “Clearing everyone’s student loans to zero, I think maybe it will be good for everyone in the short term. But from a long-term perspective, this will be very detrimental to our economy. Why do others (pay more taxes) have to repay my loan? And why should I pay taxes to cover the debts owed by others? There is no such thing as free. For lunch, someone has to pay for it.”

The professor’s remarks are indeed worth pondering. If the exemption is implemented, will this be an additional expense? The wool comes out of the sheep. Does this mean higher taxes for the people?

Alan Collinger, founder of the Student Loan Justice organization, replied that on the contrary, these student loans can be eliminated at any time, and the taxpayer’s “cost” is almost zero.

He explained: “The government has spent trillions of dollars to cancel debts for small businesses during the epidemic. However, looking at student loans, even if the debtors continue to repay the loans, they only paid back 1.6 trillion yuan. A very small part of the loan. Because most of these student loans are accumulated interest, default fines and other additional expenses. Moreover, the federal government has made more than 50 billion U.S. dollars or more in the ten years of lending, so They should have recovered their principal long ago. Exempting student loans does not require the government to pay, nor does it need to raise taxes. It only requires the President and the Minister of Education to issue an executive order to write off the remaining debt.”

As for those who oppose the exemption of student loans, Collinger retorted that he is happy for all those who have paid off their debts, but these people should not expect their compatriots to continue to be slaves to the loan.

“This question is like, shouldn’t we get the vaccine because someone is infected with the new crown? Because it is unfair to the people who contracted the new crown before the vaccine is launched? No, it’s ridiculous. Our student loan system is essentially a failure. Yes, wrong, we should end it.”

There is a long way to repay the loan, and the “millennial generation (born 1981-1996)” with the largest population in the United States is also known as the “poorest generation.” Now, “Gen Z (born 1996-2010)” like Ottigza and Turcotte has also begun a university journey to the society, and will this “laurel crown” be crowned with them?