At that time, my mother-in-law was in the queue of the concentration camp and heard a German soldier shouting at her: “Get out! This is not your team.” Later, I learned that all the people in the queue were buried alive that day. 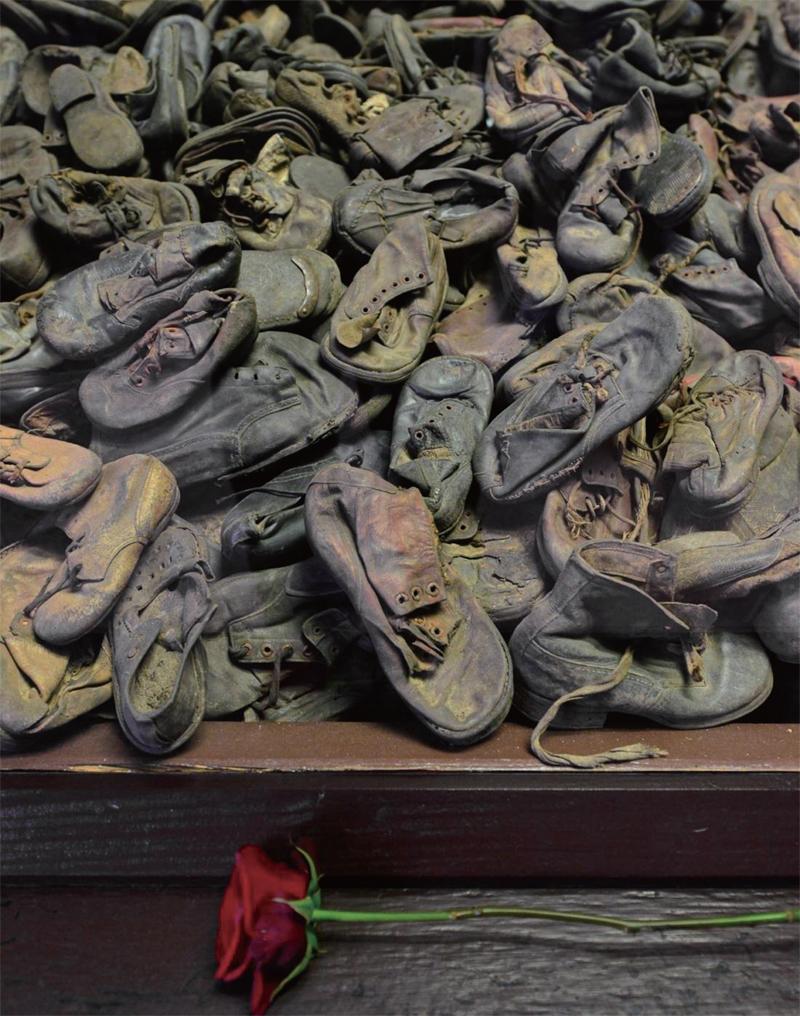 The ruins of the Auschwitz concentration camp in Poland, outside the window filled with the shoes of the victims, visitors presented a rose

In Tel Aviv early in the morning, I suddenly heard an air defense alert, and I was still in a trance. For a while, the brain was running fast: Has Palestine launched an attack? Where is the bomb shelter? How long do you want to avoid? Will it be hit by a missile, and this life will end today?

Even though I have never personally experienced it before, I have heard that Israeli nationals are required to hide in air-raid shelters when they hear the sirens at any time and place, no matter what they are doing. People who are outdoors have to lie down on the spot.

In a trance, I heard the announcer on the radio instructing citizens on how to respond during the exercise. Fortunately, it was just a false alarm. Looking at the parents-in-laws who have passed their elder years across the table, their ease of expression brought me back to the peaceful age in an instant.

My parents-in-law are the most loving couple I have ever seen, and their cardamom years were spent in Auschwitz. Both are the only survivors in their families.

Brand on the forearm
Israel’s summer is very hot and long, but the numbers that were branded on their forearms in the concentration camps made them never wear short-sleeved shirts. When I get along with them, I am cautious and never dared to discuss the topic of war with them, worrying about touching their inner wounds, rules and customs. 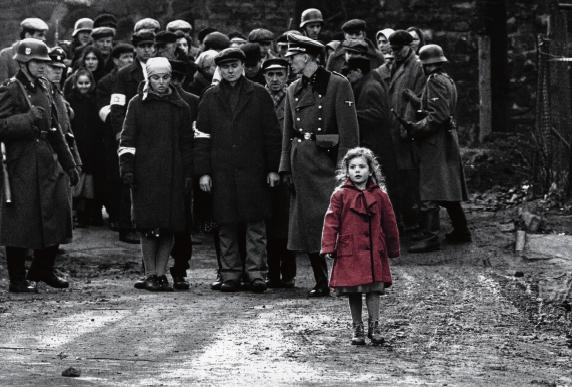 But my mother-in-law told me, don’t worry about it, just be myself. She said in an understatement: “You can’t imagine it! It’s not the world, it’s hell.” Then she said with relief: “It happened a long time ago, I don’t think about it anymore.”

I heard that my mother-in-law was in the queue and heard a German soldier shout at her: “Get out! This is not your team.” Later, I learned that all the people in the queue were buried alive that day. I couldn’t help but curiously asked, did the soldiers intend to save her? The old lady said, I don’t know.

The new arrivals of the camp were allocated, and the old, weak, sick, disabled, infants, and children were “disposed” first. It is by no means lucky to stay here for the time being. It took a few days or as long as several months. After dehydration, hunger, sickness, burial alive, live burning, shooting, beatings, poisonous gas, and human experimentation, the victims reached the end of their lives and were relieved.

Hitler wiped out a third of the Jewish population, and children alone exceeded one million. The Jews who were devout and faithful to God lamented that God was dozing, and the Jews had lost their protector.

/ Since then, Masada has become a spiritual symbol of the Jews: I would rather die than become a pagan. /

The great director Spielberg tried to interview every survivor and set up a file for every deceased. The father-in-law never refused to be interviewed. The Israeli government and Jewish groups around the world have worked tirelessly to recover the dignity of their lives for the 6 million compatriots who lost their lives.

The Holocaust Memorial in Jerusalem was established in 1953. The audio-visual materials played repeatedly in the museum make roars, wailings, sirens, and gunshots come from all corners from time to time, making people shudder with sorrow and grief. Under the dim light, the pictures and exhibits made the atmosphere more depressing, and even made the audience feel a strong smell of death.

After the outbreak of the Second World War in 1939, millions of people entered the concentration camps one after another. When the Soviet Red Army declared “you are free” before the concentration camp in 1945, only more than 7,000 people left the camp. The Jews are at the mercy of others and are excluded because they have no land of their own.

The instructions of God in the “Old Testament” also became a powerful basis for the Jewish nation to establish a nation in the “Promised Land”. After World War II, with the rise of the Zionist movement, the Jews finally had their own land in 1948. The Jews scattered all over the world have returned to “the promised land flowing with milk and honey.”

Through the memorial hall, I can more empathize with the suffering experienced by the two elderly people. I have too many curiosities and doubts about this mysterious country, and the nation that has survived endless suffering and crowded out.

Spirit of Masada
The territory of Israel is full of relics of thousands of years, because the area where it is located has always been a battleground for the empire. The vigorous shale on the barren mountain on the right side of the Dead Sea reminds me of the Dead Sea Scrolls—a shepherd boy walked into a cave in 1947 and made one of the greatest archeological discoveries in the West in the 20th century.

“Masada” means castle in Hebrew. It is located on a 450-meter-high independent hill on the Dead Sea. It was built by King Herod who reigned from 37 BC to 4 BC. The unique geographical location makes the castle easy to defend and difficult to attack. 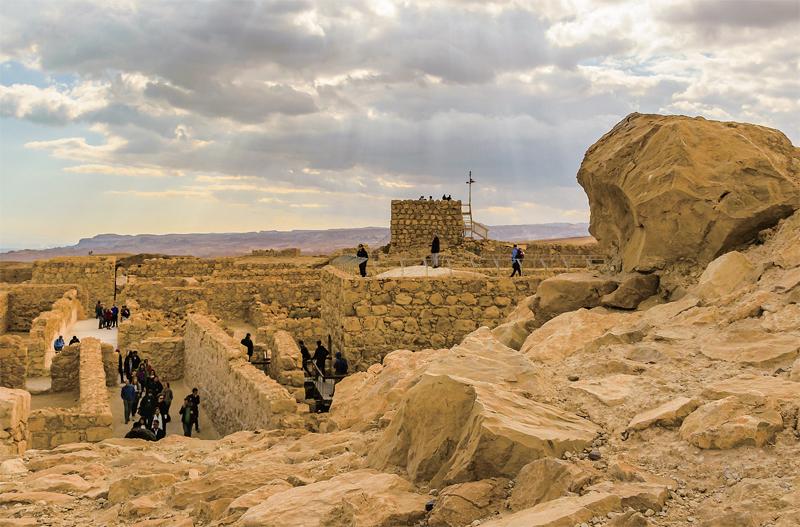 The World Heritage Site of Masada below: A fragment of the Dead Sea Scrolls

After the area was occupied by the Romans, Massada became a Roman barracks. In 67 AD, the Jews launched an uprising to rebel against the Roman rule and retake Masada. In 70 AD, the Romans captured Jerusalem and burned the temple. The failed Jewish leader withdrew to Masada with his entourage and family members, believing that they would be blessed by God here. 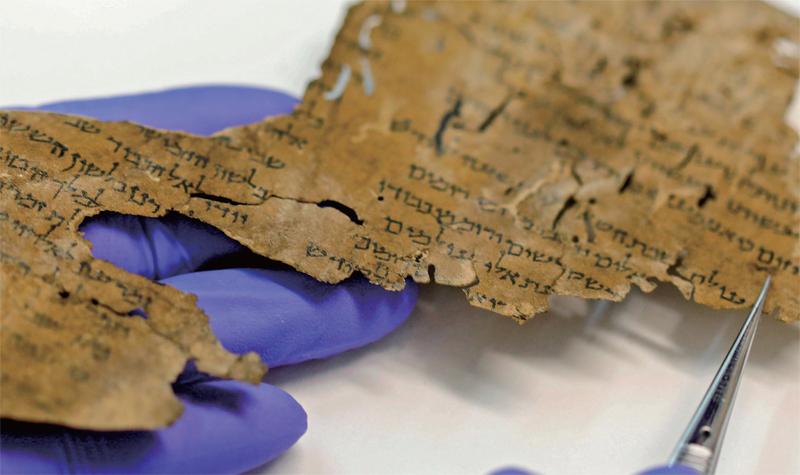 In order to break the castle, 8,000 Romans camped around and built a long slope on the west side of the hill. A few months later, the siege was still unsuccessful, and they built a watchtower on the slope, intending to destroy the wall. With no ammunition and food, except for the two women and five young children hiding in the cistern, the 960 Jews in the city chose to commit suicide and did not want to commit themselves to being slaves to the Romans.

Since then, Jews have been scattered all over the world. Masada was subsequently abandoned for centuries. By the Byzantine period in the 5th century, a group of monks built a monastery here. Two centuries later, when the area was occupied by Islamic forces, the abandoned castle was once again forgotten by the world.

Until 1828, the site was discovered by scholars. For more than a hundred years, archaeological excavations have been carried out intermittently. The government established a national park here in 1966, and a cable car was built in 1977. Masada was listed as a World Heritage Site in 2001. The site has also become a place of pilgrimage for contemporary Jewish youth.

When the Israeli Corps was besieged on the Sinai Peninsula in 1973, soldiers applied for retreat. The commander replied: “Masada will not fall again.” Since then, Masada has become a spiritual symbol of the Jews: I would rather die. Don’t become a heretic. Becoming a slave to others in God’s “promised land” is definitely not their choice.

At night, I like to walk around the streets of Tel Aviv like a fish, patrolling the rooms facing the street curiously. What catches the eye is not the “upright” bookcase, or the artwork such as hanging paintings. I asked suspiciously, is that a library? The locals replied, they are ordinary people!

This may explain why Jews, who account for only 0.2% of the world’s population, occupy an indispensable position in the international arena, whether in economics or academic fields.